Brekkie was a good coffee and a very fresh blueberry muffin at the Cornerstone Coffee & Coffeehouse in Mitchell. When the top rated coffee spot on Google turned up as McDonalds I got a bit of a fright. After a little more searching, all turned out fine.

The Comfort Inn, Mitchell was one of those places where if one resident flushed the whole hotel shook. Lots of flushing went down. 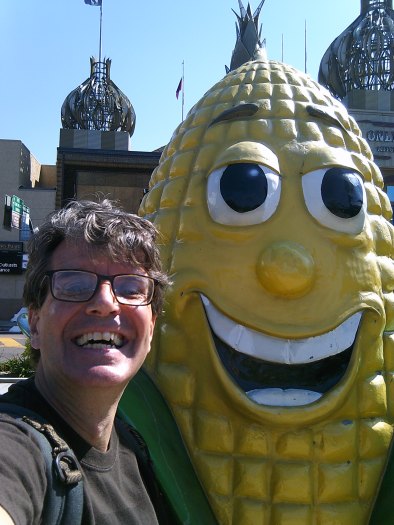 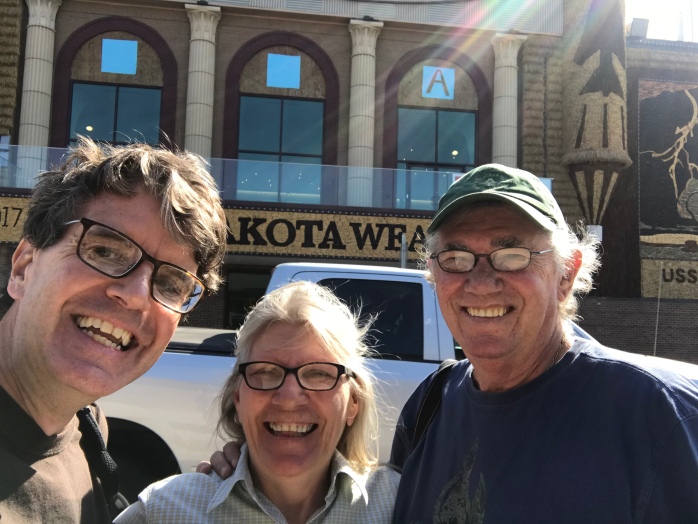 Well I hit the payload of travel information and advice today in Mitchell.

Michael & Pam DeLambo sold everything 4 years ago and now travel the country in their RV doing volunteer work. They down anchor in their place of choice and stay as many months as the feel. They spent their last few months in Montana. West Virginia is their favorite stop to date; Pam told of a night when the night was lit by millions of fireflies and they loved the local music.

Michael was in the Navy during the Cold war, cruising on submarines. They were tracking Russians in the North waters. He had a lot of great stories to tell and a couple of scars to show, mainly from the good times in Scottish pubs he explained.

Originally residents of Illinois and Wyoming, they love their new life on the road. My two months of travel pale.

On to my first destination of the day, the world famous Corn Palace of Mitchell.

Entering the Corn Palace you are greeted by the sickening sweet smell of Caramel popcorn. I want to toss my cookies when people nuke the stuff in the office, but this is overwhelming.

Well, how can one describe the Corn Palace?  The Louvre of South Dakota? The Whitney of the midwest. I saw a cleaning lady yell at her mop bucket.

You have to wonder what the work application of a corn artist reads like. They were toiling away with repairs to the front wall of the Palace this morning. Does it pop in extreme heat?

At the souvenir store cash register, the darling woman told me my accent got her cornfused. Get it? CORNfused. Bet that was the first time she used that one. I purchased the ugliest Christmas decoration in creation. It will never be let near my tree.

This has to be the most America venue I’ve visited. A very Marty McFly auditorium (cornatorium?) , if it wasn’t for all the ugly corn murals. It’s great. I could say the place was really cheesy but… you know what I’m going to say…

My Irish Catholic induced phobias kicked in to overdrive when I visited the creepy  Walk Thru Ancient Bible World across the street. Marionettes and religion and a weird tin donkey, this will haunt my dreams for years. I commented as such to another visitor. He admired the artistry. Shudder. 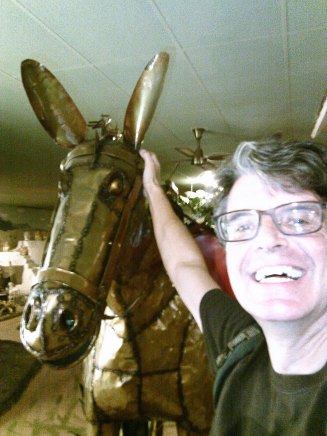 Signage on brown brick building down the street boasted the Greatest Coffee Shop in the World. After plastic Jesus, Mary & Joseph, I needed one. It was out of business.

There are 270 Miles between Mitchell and Wall Drugs. This better be worth this drive. The signs for this Wall place started at the State line.

It’s a long and windy day on them there plains crossing South Dakota. I stopped for a soda at the Crow Creek Reservation in Fort Jefferson and Denise recommended I see the Big Bend Dam. So I did briefly then took to the Interstate, it’s so flat you practically get the same views whatever you are driving on.

I happened on the 1880 Town by chance so pulled off the highway for a look see. It was so right up my alley. Dances with Wolves was filmed in the region and they have a full exhibit movie of memorabilia and a mish-mash of other historical Western artifacts.

Put me in Coach 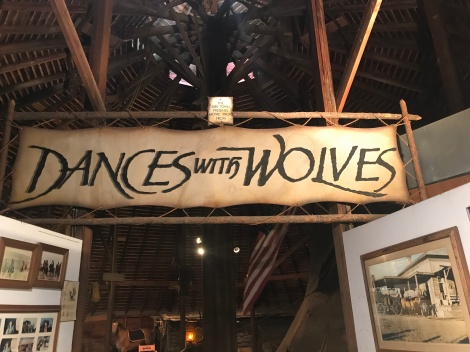 The beautiful John Barry, Oscar winning score was playing throughout the town. The 1880 Town is made of original western constructs from the 1800s,  moved from other locations. I was so movie geek pleased. 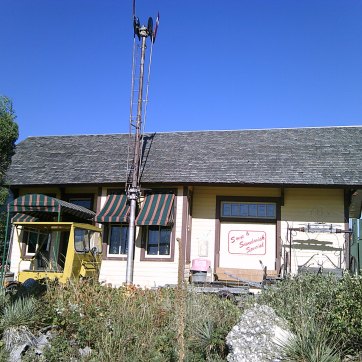 Mira Doroftei  a Romanian exchange, was a surprise employee to find working in the Western and Periodicals Bookstore in backwoods SD. Mira noticed my accent we got to talking. Mia is studying for a Bachelor Degree in Psychology, back home in Romania and is here as part of the Work and Travel United States program. She will graduate next year.

Mira has been here since June and worked in Sun Valley pre Wall. She is taking a two day bus ride to NY early October for a brief visit, the JFK home. Mia already had a multi legged bus and flight adventure to make it here from Bucharest; another student with incredible drive. 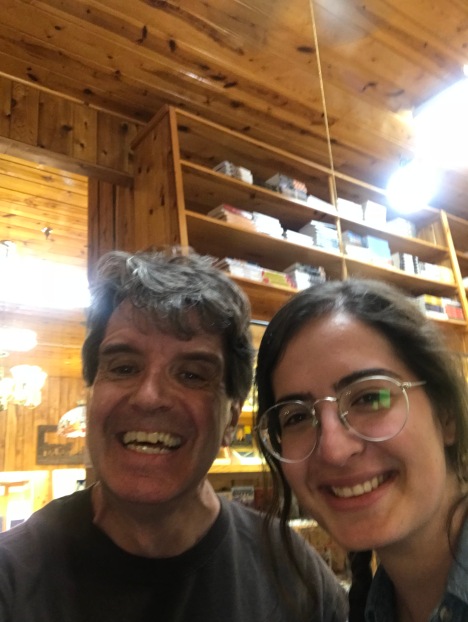 Ok – Bizarre moment in the Wall Drug restaurant. I was about to take a selfie in the backroom of the place and was asked if I minded not getting the group behind me in it. It looked like a kids birthday gig, all wearing Kelly green paper hats. Of course it was not a problem. I then saw Frances McDormand walking by with a Wall Drug party hat and waitresses outfit. I said hello, shook her hand, and congratulated her on her Oscar win and working with the Irish.  She was very nice.

In Wall Drug, what are the chances?

Popped down to the bar/karaoke/casino Cheers, for an OJ, and listened to a few massacred C&W standards.

Cheers was a mix of hotel residents and locals, hosted by the usual over enthusiastic KJ. The voices were no better or worse than in NYC, just a lot less Koreans.  One large lad unfortunately took the “dance like you’re alone in your living room” thing too literally and of course someone always butchers a Patsy Cline song (Crazy tonight).

330 miles added to the odometer today.

5 thoughts on “Tooleing Around: Day 9”