Skip to content
Tooleing around Uncategorized September 18, 2018September 18, 2018 6 Minutes
Butch’s bed was extremely comfortable.
A little known fact about Butch. He had no shower in his room, just a bathtub. Butch Cassidy had a special plastic Bud Light cup he used when washing. He called it Mr. Rinsey

Monday morning late breakfast at The Busy Bee and it’s busy. Locals, tourists and Longmire fans converge. Bubbly Hayley from thd bar is working the floor here too. It’s a bit of madhouse.

Craig Johnston, the Longmire author is from outside town. The Busy Bee, I’m told,  is the breakfast spot of choice with character Longmire ,run by a fictional sassy manageress.  A manageress must always be sassy in fiction. It’s a hotspot for the fans. Its right next door to The Occidental. 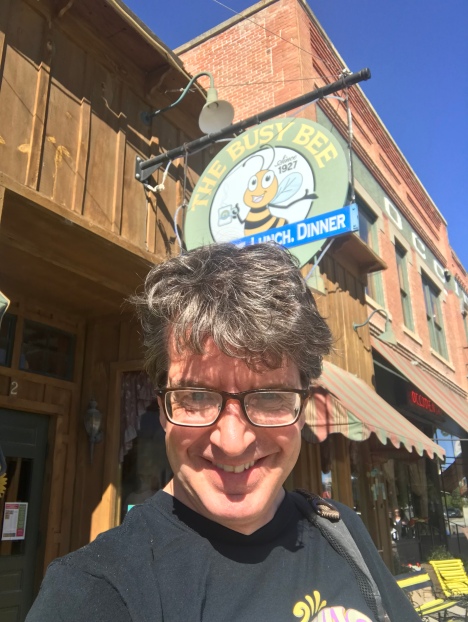 Johnston’s wife owns Longmires Campaign Quarters , a store in town. I’m told you’ve more chance of seeing God than finding it open.
Hayley told me that a bedraggled Bill Lee was the first customer at The Busy Bee doors this morning, waiting outside before they opened.
He sang to her and her co-worker. That’s Life at seven o clock in the morning. He needed to find somewhere that sold phone chargers and toothbrushes. Bill Lee loves his breakfast.

Breakfast and coffee was very good as was the service. Potatoes O’Brien (I feel stereotyped), biscuit, eggs and bacon. My Primus t-Shirt started a conversation with a couple of fans.
I had two complaints on the blog that I’m smiling too much, too much teeth. I’m starting to look like an Aardman claymation character. I’ll endeavor to break that up with some homey postures and assorted expressions. Selfies are not a strength.
The Longmire store was open. I bought the first book in the series – The Cold Dish. Guessing it’s not going to be dark enough for me, I’m thinking Murder She Wrote type readers, but when in Buffalo.
The town has a Longmire festival every year and the show stars usually turn up , as does author Johnston and the missus. The fans go wild, knickers thrown, the lot. 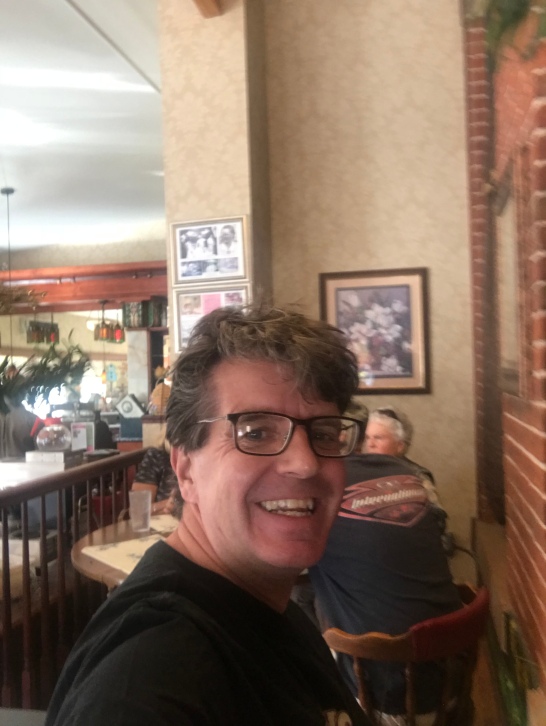 176 miles on RT 16 to Cody. The route took me through Bighorn National Park along its serpentine mountainous roads and through it’s majestic peaks, glistening blue lakes and evergreens.  There were a lot of perfectly positioned pull over spots on the road to take in the scenery. 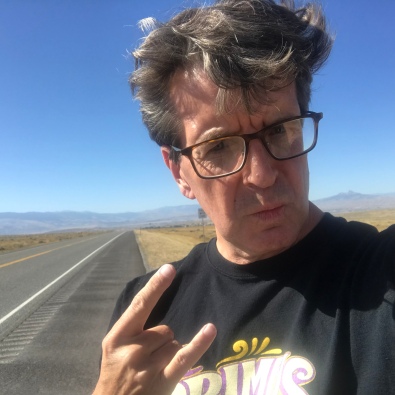 Stopped at a small town Willowood gas station for water They offer skull cleaning services there. Good to know.

Then back through another big barren butte, all looking reminiscent of where Charlton Heston crashed his rocket in Planet of The Apes. If you haven’t seen the original, do.
As I drive the vast, open highways, counting the carcasses of dead beasts, I did my own mental count.
For the record, in order of poundage , here’s the list of animals I’ve smathered across the road over the years with my various vehicles:
1 deer.
2 raccoon.
3 groundhog.
1 Skunk.
3 squirrels (all deserved it).
Numerous frogs and I think some chipmunks but difficult to tell because you don’t hear a crunch.
On the inanimate front , I have destroyed:
1 BBQ grill (it came out of nowhere),
1 Gas Pump Protective Rail (also came out of nowhere).
1 Garage Door.
I’d like this count to remain unchanged.
On another side note, you have to wash your windscreen a lot in this part of the country .
I saw my first road runner, running across a road today. Who, as a child, did not want Wiley Coyote to ACME bomb that irritating avian to Looney Tune Heaven?  Beep Beep asshole.
Cody is out there, way out there. 4 hours on the road and I’m there.

Since I’m always falsely quoting my Granny, I had to stop in Granny’s, when I saw the sign, for a coffee and the always reliable grilled cheese . Shiane, on the desk, couldn’t understand why I’d drive all the way here. Ominous start. She moved here from Salt Lake City two years ago and kinda prefers it here because Salt Lake City is so gigantic.

Brook and Howard at Granny’s helped me out . Brook had “You are my sunshine tattooed on her forearm, in her Grannys handwriting. Not sure if Granny is above or below ground but was afraid to ask.
The Primus tee strikes again. Howard , the short order cook’s first concert was Primus opening for Rush. We bonded over  Wynonas Big Brown Beaver and Howard shared some local recommendations. Primus seems real popular in WY.

Cody was busier than I expected but I found a nice clean place, The Carter Mountain Motel, blocks from the main drag.
The owner/receptionist was slightly irritated that I booked through Hotels.com, because of her  fee. She had her cockatoo attack me at the motel front desk in retaliation.

I took a walk down the main drag in Cody to try and catch the Internationally Renowned Western show.
Cody is much more of a bootstore, than a bookstore kind of town. But I found Legends Bookstore which was decent, housed in one of the attractive brick buildings on Sheradin.
Sheridan, the Main Street, is a very attractive, red brick lined, historic thoroughfare . I found the 6pm Western show, outside The Irma, the hotel Buffalo Bill Built for his Beloved Bride (excellent illiteration I thought). 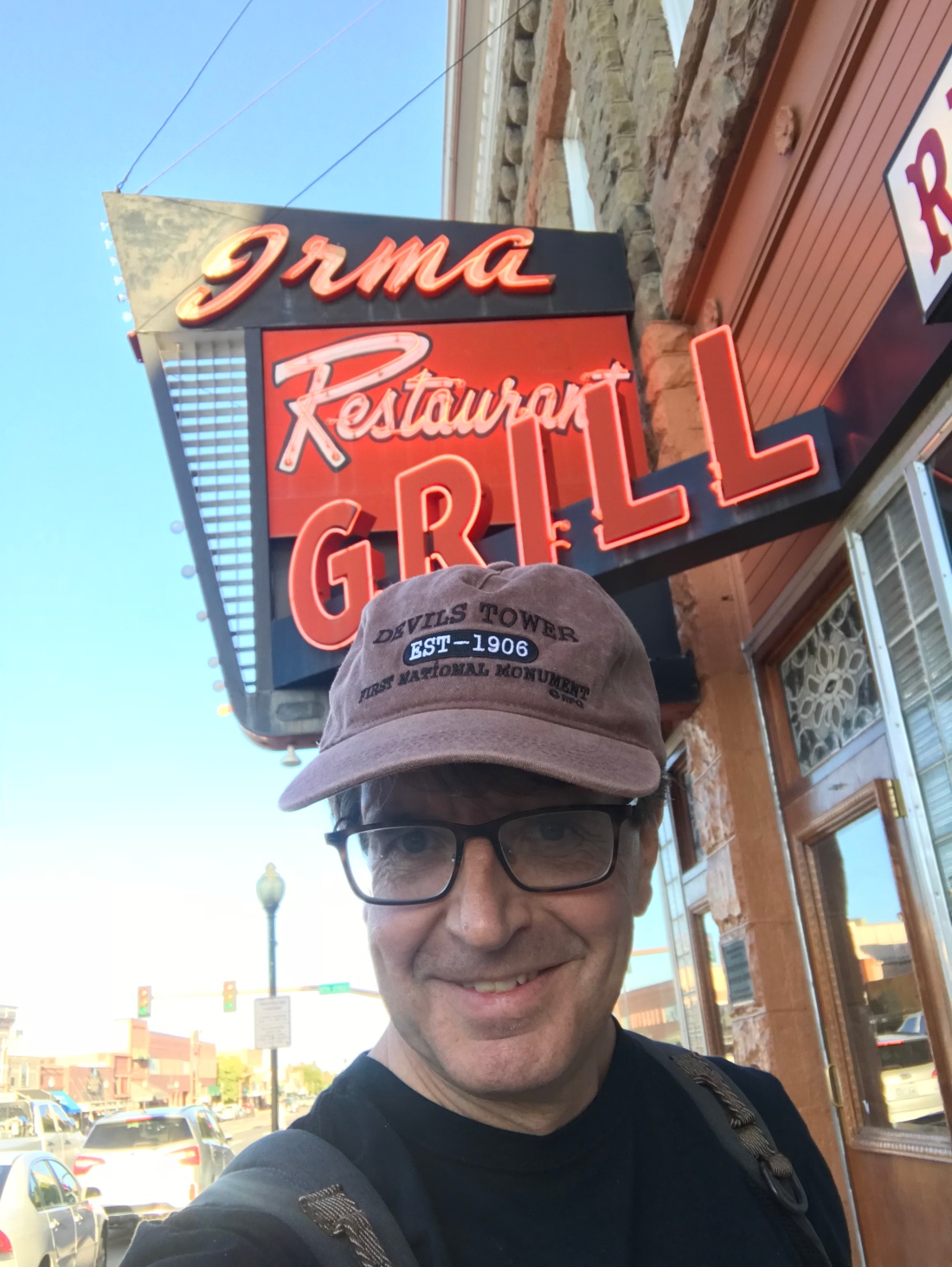 Gun play was in one minute. My breath was extra bated.
Well , I have the cheesiest event of trip , so far, in my holster now. The Wild Bill Wild West Show, with Wild Bill trash talking and shooting villains and vagabonds, in Cody. The only part I found amusing was the large “ATM Inside” scratched on the 1880 Bank replica used in the show. 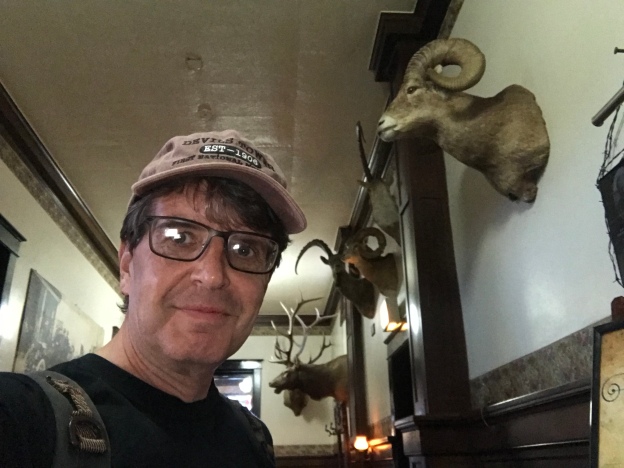 Rawhides coffee shop claimed to have the worst coffee, based on an online review. I went in and the cappuccino was decent.

Mark Dodds, out of Kent, Ohio stopped me to chat as I arrived back to the Motel. He was sitting, watching the sunset over the mountains, having a Coord outside his room. The father of two sons,and grandfather of 5, he is partnered in business with his two sons and he had always worked with his hands. With a knee and shoulder issue he has had to retire a bit earlier than he’d like and will be getting his bits replaced this year. The family business specializes in laser calibration of large equipment.

His first trip to WY coal country, 40 years ago , was to figure out issue with eight pieces of earth moving equipment for mines, then valued at $150k a piece . He fixed all the machines and got a promotion.
He’s an avid gun collector with 50 pieces, each of which he uses. A very active member of a gun club, he shoots twice a week. Mark is in town to visit the gun museum. He’s wandering, with a very loose plan, as I am, and will go back to Ohio somewhere between now and the end of October. Given his druthers he’d live in the West , but the grandkids and wife are back in Kent.
The mosquitos started to bother Mark so we said goodnight.
Because it was one of the few places serving until 10, I went to Wyoming’s Rib and Steakhouse, a casual joint , to eat at the bar.
I thought I’d driven a lot, until I started chatting with Brad Morrill. He’d put 460 miles on the clock today. Brad’s a traveling salesman for high end windows and doors. His sales region is Montana , Wyoming and Utah. All States have a lot of new construction going on so his business is good. 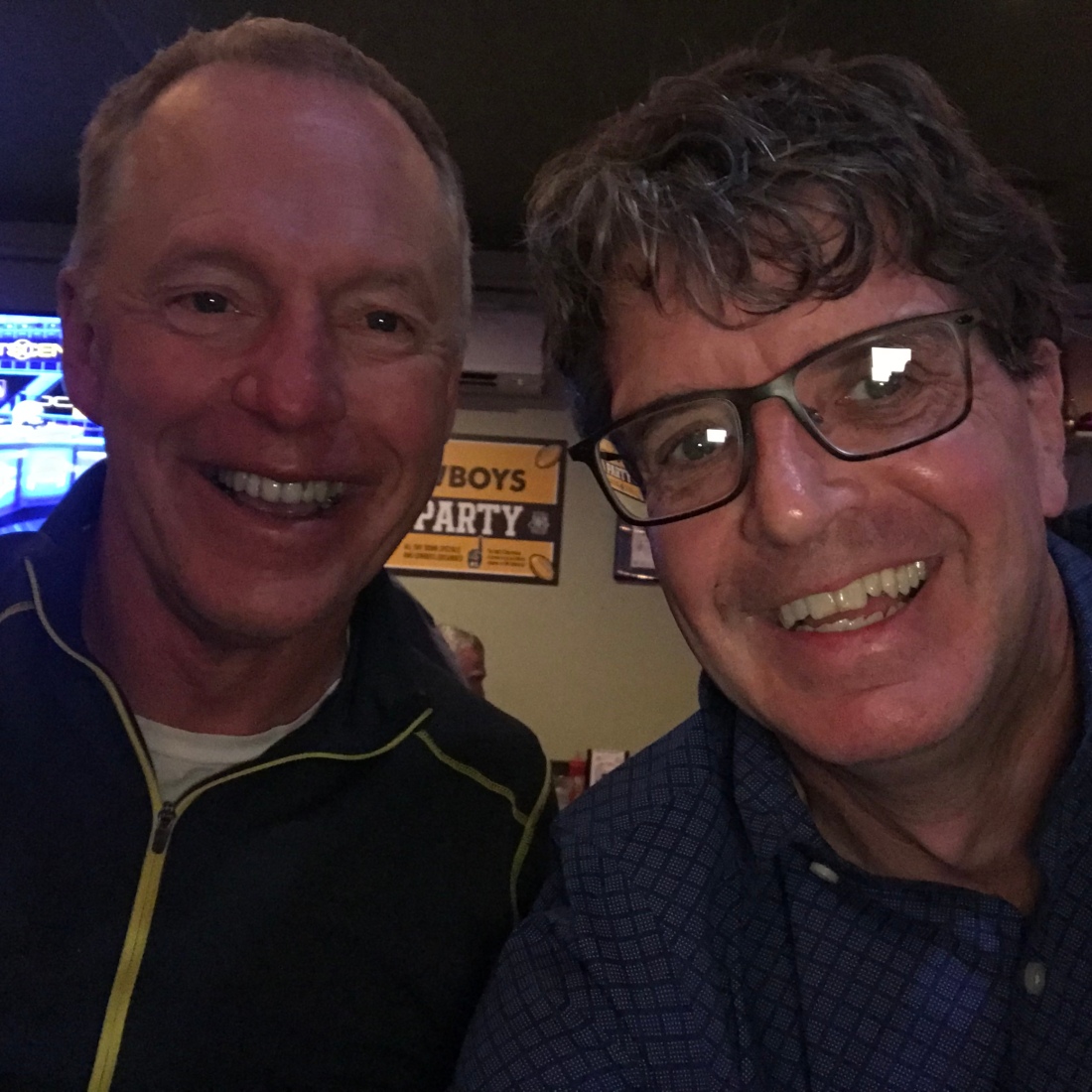 Brad and his wife of 33 years live about 80 miles out side Salt Lake City, Utah. They are both ex-Mormons. Brad did two years as a Mormon missionary around the United Kingdom when he was 18 or 19, back around the time of the Falklands war. He was going door to door six days a week, trying to entice Brits to the Mormin life. Now if that’s not the basis for a TV series I don’t know what is.
Brad and his wife went their own way from the church some years back. He seemed to feel the expectations were very high, back in Utah, after his exhalted missionary stint.
We talked for an hour.
I had the Chicken Fried Chicken 10oz, a smaller item on the menu and very good.
I offered Brad a lift back to his hotel a couple of miles away. He is recovering from a torn ACL. He started laughing when he saw my loaded Escalade. He misinterpreted my trip a bit.
“I thought you were some rich New York asshole flying around the country”, he said.
I was elevated in Brads esteem – a driver.
Today’s Spending:
Gas: $62
Hotel: $105
Dinner: $17 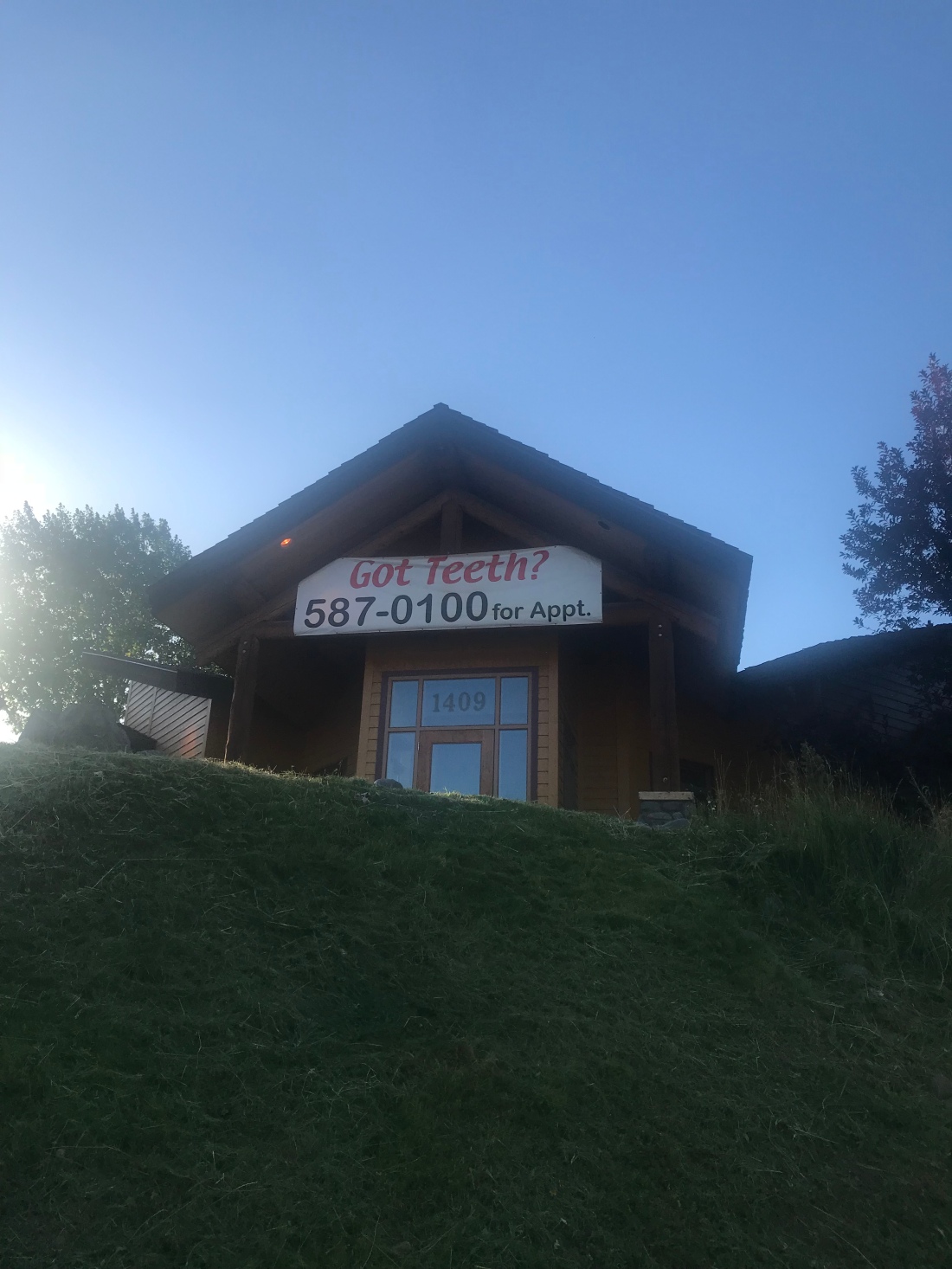