Skip to content
Tooleing around Uncategorized September 20, 2018 6 Minutes
Breakfast at the hotel wasn’t so great.

Looks like there is a lot to see around Bozeman, so I booked in here for a second night .
Plenty of space in my Ramada suite, though the TV size to bed distance ratio is well off, binoculars needed. I’m sleeping like Rip Van Winkle this trip no matter what the bed.

Grabbed some eggs, but couldn’t drink the Ramada’s weewee Java. I drove to Main Street and found Wild Joes Coffee.
A bit of a contradiction, Wild Joes has the peace, love and happiness vibe of a college town, and a couple of semi-automatic rifles in the window. A modern look with high ceilings , very good cappuccino  and delicious, fresh, cheddar,  maple , bacon scone. Best scone I’ve ever eaten. I almost caved and took a food photo. 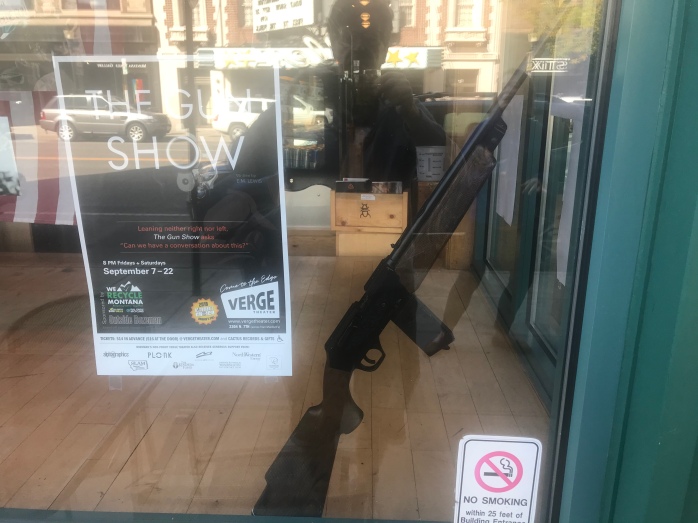 Ellen sat down beside me on the coffee shop, leather sofa. Out of NYC, upper West Side, from the same street my wife lived on. Ellen moved here to be near her daughter, who’s has a baby due January. Ellen misses all things Manhattan. Only here a month and working the local radio station, she has not figured the place out yet. Like Manhattan, no one she had met yet is actually a local. Her daughter fell for Bozeman for the skiing. Snowboarding and hiking. Bedsides the college, that seems to be the main draw.
Ellen did not strike me as a selfie candidate.
Everyone told me I had to go to The Museum of the Rockies, so I went to The Museum of the Rockies.

The sign on the paleontology room door said knock if I had questions. I had questions , I knocked.
Anne came out of the dinosaur bone cleaning lab to answer my questions. Her expression said “No one ever knocks. “.
Montana is renowned for its excavation sites, particularly in the North East. Back in the 1880s there was a bone prospecting rush on the region, when every museum in the world wanted a full dinosaur skeleton. The Natural History Museum on the Upper West Side features many pieces from Montana .

Anne’s family’s , Romers , are originally out of Pleasantville NY and claim a few street names there. 30 years in Bozeman, she loves the town, but felt you need to be fourth generation to be considered a local.
The University is renowned for paleontology studies.
Anne is a volunteer bone cleaner, as was her bone scraping colleague, from Brooklyn. The Museum has one of the best Triceratops collections globally , the display ranging across size from infant to big old adult, an imposing display.

There was also a Native American Indian exhibit and a display of wagons and old vehicles, and a cannon. I flew through those and bypassed the Planetarium.
It really is an extremely inviting museum and the excellent gift store a bonus – bought a Dino-cap and key chain. Diane, upbeat and helpful, warned me about fires in Glacier National Park and that seasonal closings are starting up there. They can get snow this early around here.

As I was told, Bozeman is the fastest growing Micropolitan (a town of under 50k) in the country. Bozeman had a population of on 17k when Diane moved from Minnesota 47 years ago. 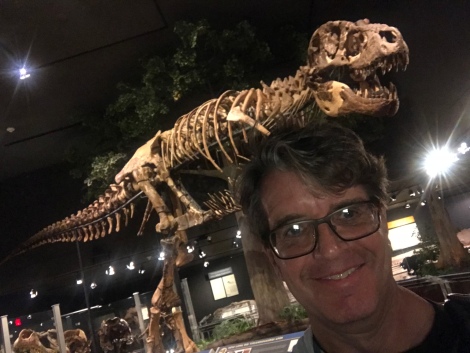 No one is from Bozeman.
It got cold here today.
I drove a half hour on the back roads to the Montana Grizzly Encounter, a rescue shelter.
Ella, manning the ticket hut, at the Grizzly Encounter is here from France with her boyfriend.
They currently host five rescues at the Encounter. Each bear has its own personality and they don’t all like one another, so the bears come out in public when they feel like. Only Brutus was feeling like it today . 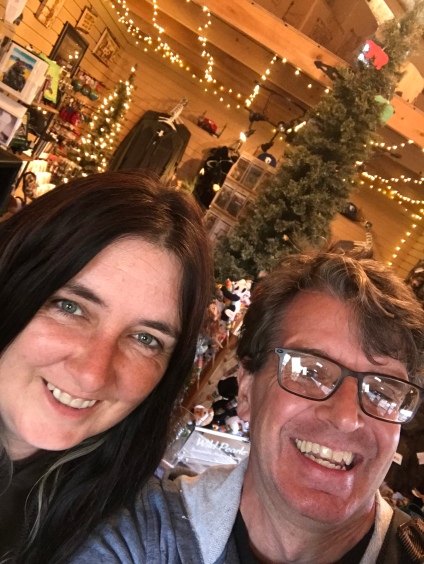 Paige, the MC, knew her bear facts inside out and rattled them off like an enthusiastic auctioneer at a cattle mart.
Amy, working in the gift store,out of Minnesota, commented on my accent. She felt she lost her accent since she moved here. She hadn’t that I could hear but then all you Americans sound the same to me.

They call this time of the year the newly weds and nearly dead’s season. Such are the visitors. The kids are all back at school. The sanctionary is open all year long. 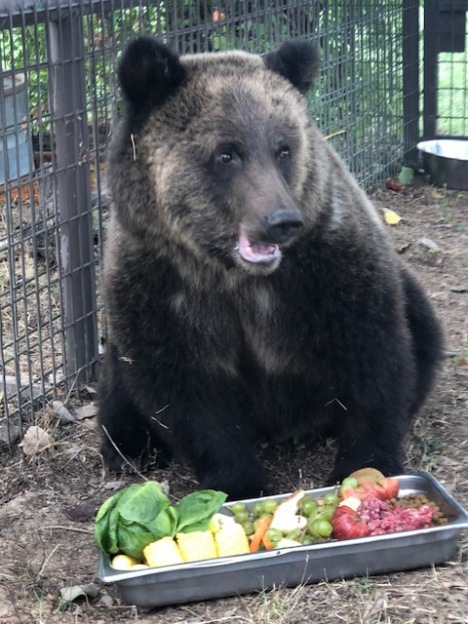 Amy, is one of 3 business owners of Grizzly Encounter and actually does the rescues. She also runs a non profit rescue and recently rescued a yearling bear cub that was adopted in Texas. Amys oldest rescue was 18 years old with a twin, now 32, and still at the Rescue. The twin died of leukemia.
Amy had rescued dozens of black and Grizzly/Brown beers over the years.  The sanctuary construction started in 2002, opened in 2004. Thd five bear, currently housed, cost $900 a week to feed.
I learned today that a Grizzly is a Brown bear.

Brutus the oldest rescue was the size of a squirrel when he was first brought in. He now weighs 900lbs. You’d know him from commercials and movie appearances, and I believe he did Oprah.
Amy actually ran off with the circus when she was 17. That’s where she developed her love for bears.
While I was chatting. Amy got a random email from a Paige O ‘ Toole, looking to volunteer at the center. No family member of mine, this is real work.

Each day a live goat is thrown in the enclosure and the bears get to fight for mutton and their survival. Keeps it real.
Today was Ginny’s turn.
I said my goodbyes to Ginny and headed away in tears.
“Kaaaaaaaaaaaaaaaaaaaaaaaaaaaaaaarl!”
It’s a Joke!
Just like the bears, the goats are treated royally.
I dropped  a few dollars in the jam jar by the cash register for goat food and went on my merry way.
Visit the Grizzly Encounter when you go to Montana, support the wildlife and have a chat with Amy.
I finished “Fear” on Audio book. Per rule of travel #6: Keep my opinions to myself (the toughest of rules), I’m keeping my gob shut.
I will just say, it’s very well read.
Continuing the boostore quest, the Country Bookstore had a staff that really knew their books and authors and helped me with Montana based scribes. The store has been on Main Street 61 years.
It was explained that the town is now jokingly referred to as  Bozangelis, there are so many blow ins. Catherine, the bookworm, was from outside Chicago and had lived years in Manhattan. 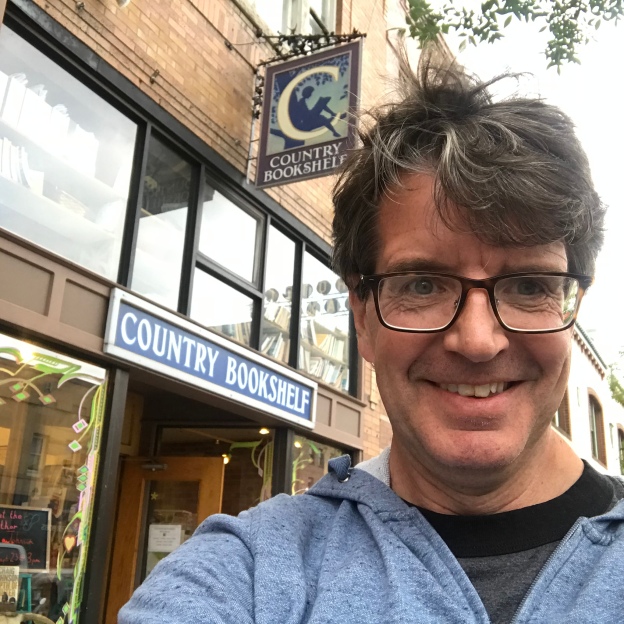 Still no one from Bozeman.
A well traveled friend advised that when I saw a hotel laundry to use it. There was a laundry by the hotel gym, I used the laundry and the gym (gym being a very generous description of a closet with a couple of bits and bobs).
Paleontology and Bearology in one day, a veritable Karl Cousteau.

Dinner at the Montana Ale House, a very large, wood beamed establishment in town and about the only place that served until 10 and it was fairly hopping. I have to say, they are a healthy looking bunch of people in Bozeman.  All that fresh air and snow games, I guess.
Dan Naillon, eating at the Ale House, had one of the more interesting life stories I’ve heard on the road. Dan, originally out of California, was just passing through Bozeman too and was sipping a Macallen at the bar. He’d gotten in after dark, a few minutes before.
Working previously as a certified Audi mechanic , Dan has been driving 18 wheelers cross country the past couple of years.
He contracts with the oil companies , hauling fracking sand to North Dakota oil fields, in all kinds of extreme weather. Including truck weight , each load weighs 80k pounds. A fill of diesel  costs between seven and eight hundred dollars and gets him a thousand miles.
Dan is a long time insomniac, which he feels suits his job. He works 100 plus hours a week, driving ten thousand miles monthly. For the most part, he loves the job.

Dan has a Nicaraguan girlfriend and had been getting to that country frequently, over the past 24 months , taking expensive, complicated and long flights. Things have gotten messy for Dan and the lady. With the political situation worsening in Nicaragua his girlfriend has moved between there, Spain and now Costa Rica. Dans trying to figure where to lay his hat.

Dan lives out of the back of his semi, for the most part. It’s the size of a studio apartment.
It was a fascinating conversation for me.
All I ever knew about long distance truckers before tonight , I learned from that terrible movie Convoy with Kris Kristofferson … you know the song “This here’s the Rubber Duck”. I knew nothing about fracking.
Dans driving back to North Dakota tomorrow. Another long haul.
I never did meet anyone from Bozeman .
The Tally:
Hotel : $105
Dinner: $14 – very good
Museums & Grizzlys: $20