I was accosted by a Chatty Gluten Free lady, pre coffee this morning, at the lobby breakfast buffet. Margo pointedly skipped the pancakes but had no problem with the eggs and bacon. And eggs and bacon. No problem at all. Can you believe the Doctor told her just right before last Christmas about her gluten ailment?

The Fighting Irish throng ate breakfast like it was their last night on death row. The food was good; the coffee had slightly more flavor than water; the staff remarkably friendly, even busing tables.

And yes, I went for another food free for all. But it was bright and nicely situated in the lobby area and there was nowhere else close. I caved.

Those deodorants that get white powdery shit all over your t-shirts should be banned.

“Pump it up” – Elvis Costello, as I drove to see the Notre Dame Campus. A good song to kick off the day.

Barbara at The Bookstore, in South Bend, taught me my first lesson of the day. There are no books in The Bookstore.  But I did buy a leprechaun key ring and a Notre Dame baseball cap so I’m an official fan now.

Barbara told me her family was originally from Brooklyn. She had an Uncle who drove his Studebaker back there from IN each summer. The old Brooklyn, as she put it (pre the man bun-vape-types). The old NY neighbors thought he was coming back loaded – he wasn’t. Barbara felt we all end up in the place we should be in life. Hers is South Bend.

Notre Dame today was my first ever college campus. Pretty spectacular. It’s a teeny bit bigger than the grounds of University College Galway, maybe bigger than Galway.  I took a full walk around.

With my lousy sense of direction, I hitched a golf cart ride to try and snag a game ticket and was fortunate to share the ride with John and Marilyn Mackie, in from coal country, Pottsville, PN. John, a youthful 76, is a Fighting Irish fan as long as he can remember.  The couple try and get in for a week in the season each year and bookend a couple of games.  Their granddaughter is currently a student.

John had met some of the original Molly Maguire families and had great stories to share. He also gave me a couple of good book recommendations on the topic. My only point of reference was the Sean Connery/Richard Harris film. 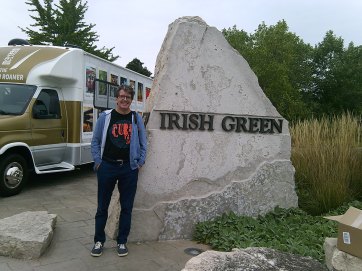 John had worked as steam fitter and welder in Manhattan. He was there in 1962 for three and a half years.  As one of their son’s had studied a semester in Galway (and is now a professor at Boston University) they had traveled to, and were familiar with Galway. They had taken photos of the bronze bust of JFK in Eyre Square, my father’s work.  So we had my two home towns, NYC & Galway,  in common.

I had a nice chat with the Brunelli family, also in from Pennsylvania (Lancaster). They try and get in for a game every year. They were nice enough to take a couple of snaps for me,

The enthusiasm at Notre Dame today being so infectious is why I decided I had to stay and see this game.  Route 66 Westward was the initial plan for the day.

A very good friend and Michigan grad (as is my wife) recommended I visit Cereal City, in Battle Creek Michigan on my bizarre Museum quest. It turns out it closed down in 2007. She’s a bit of a flake (Yes!  A Dad Joke!).

Cereal Joke: my father was eaten alive by a crocodile. Snap. Crackle. No Pop.

So, instead of cornflake exhibits, I traveled to South Haven. It’s an exquisite little summer vacation town with a landmark red lighthouse and attractive beaches. South Haven is the first family vacation venue my wife ever went to with her parents and sister. Who says I’m not sentimental?

The Cure tee was a big hit as conversation starter today, more so than other concert shirts. Guess we Cure fans are cultish.

Black River Books was a fun find with a wonderful stock of used books. Because I do not need another book I snagged a first edition hardcover copy of John Le Carre’s , The Little Drummer Girl.  Pam, a retired mental health worker and her husband Dick, a retired Pastor, are the owners. They took the thousands of books they had accumulated over the years in Florida and opened their wonderful book store in South Haven, 12 years ago. There’s little I enjoy more than talking books with people that love books.

I grabbed a drink on The Idler Riverboat. It’s a lively, boat deck bar but had an auspicious menu and not the cleanest looking bogs. Instead, I had my first perch sandwich for dinner at The Black River Waterfront Bar. It had a hopping local atmosphere and the food was exactly what I would have expected.

Not on my armpits

Then back to South Bend.

So I scored a ticket for tomorrow’s Notre Dame Game. This will be my first ever college football game. They are playing some other team.  I’m ready with my green cap.

Hotel: $135 (Yet another Hotel Tonight success. I’m in the Doubletree near Notre Dame pre-game. The rooms are listed on Travelocity for $411)

It was pointed out on my comments that I missed two Road Movie Goodies on my List.

Priscilla Queen of The Desert:  Hilarious, cross-dressing bus trip across the Australian outback. This was an Oscar winner for the over the top costumes.

Down By Law:  An oddball, neo-beat comedy  from the always interesting Jim Jarmusch.

3 thoughts on “Tooleing Around: Day 4”