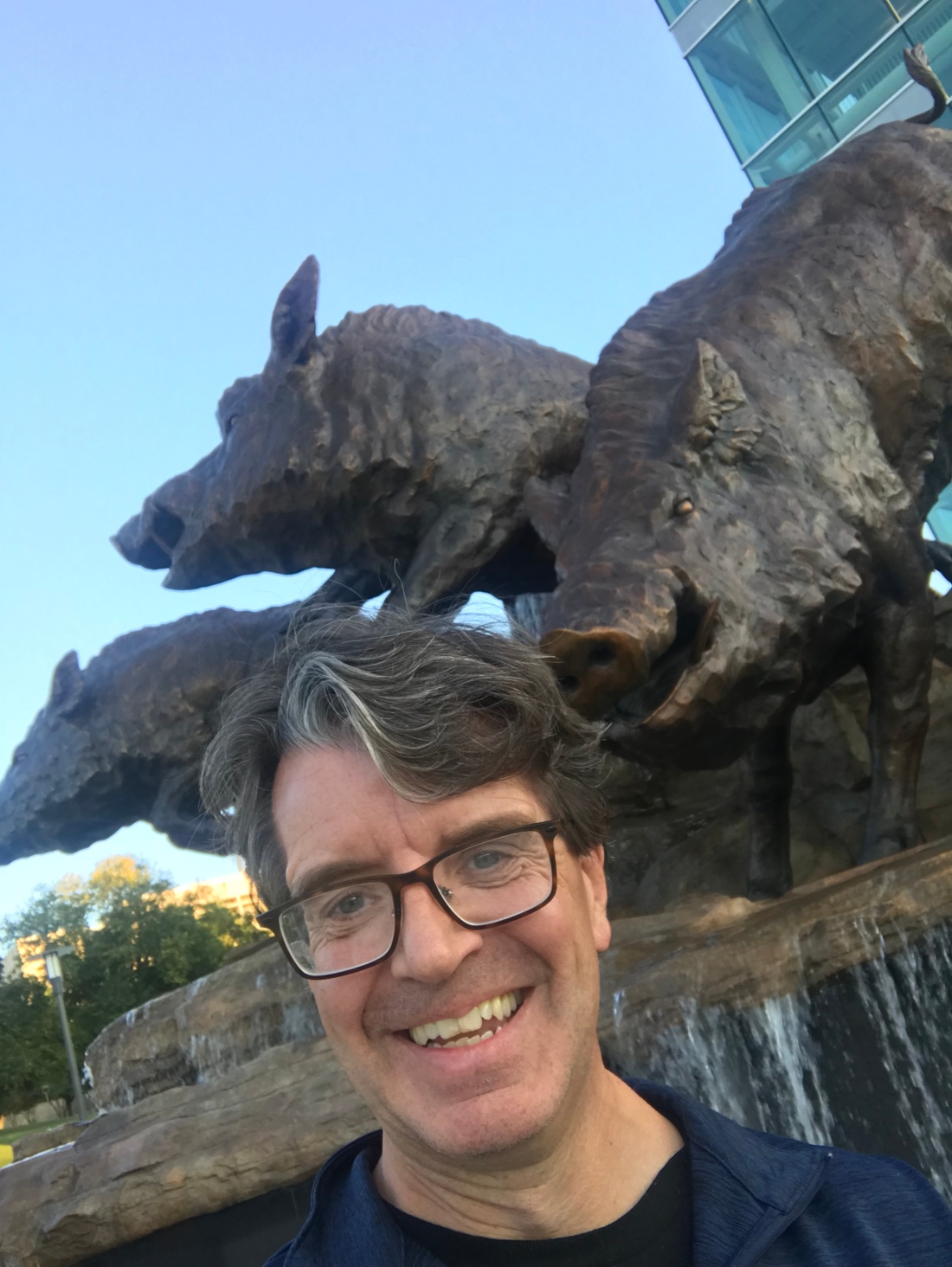 One makeshift Bluetooth car player down, but like a good Boy Scout, I came prepared with this Pyle. 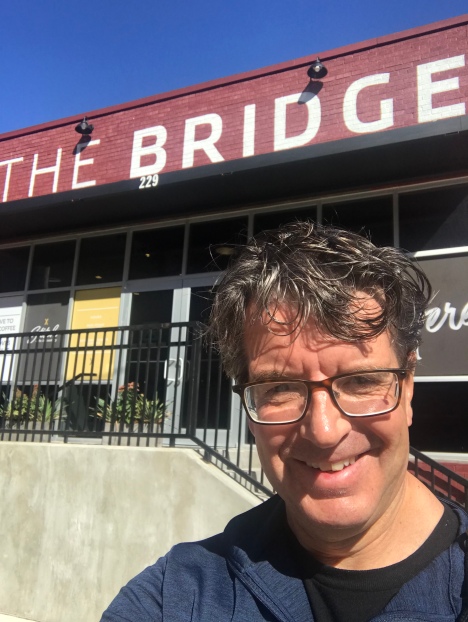 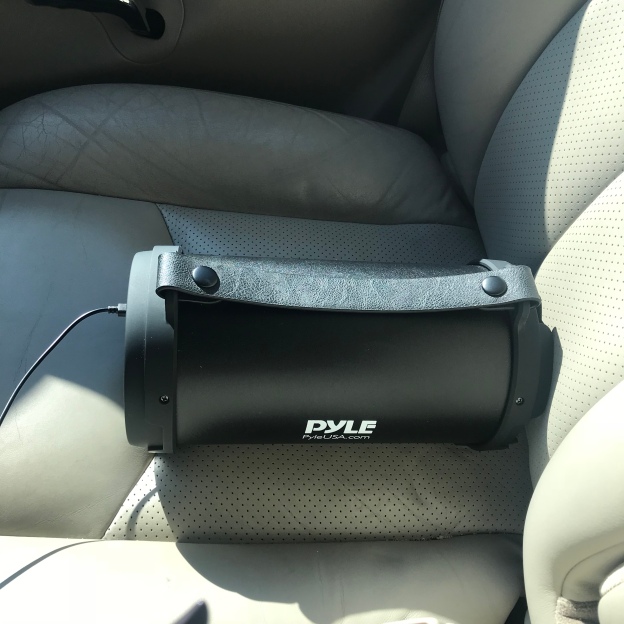 Went back to Stitch for breakfast. My old buddy Kolton said he was sorry to hear the pigeon Museum was closed yesterday. The counter conversation spanned from sound quality at the Criterion (room for improvement) to European travels to Irish Cuisine (two worlds seldom used in the same sentence) to dead bodies in fish and chip shop freezers in Galway ( Google it – great story). 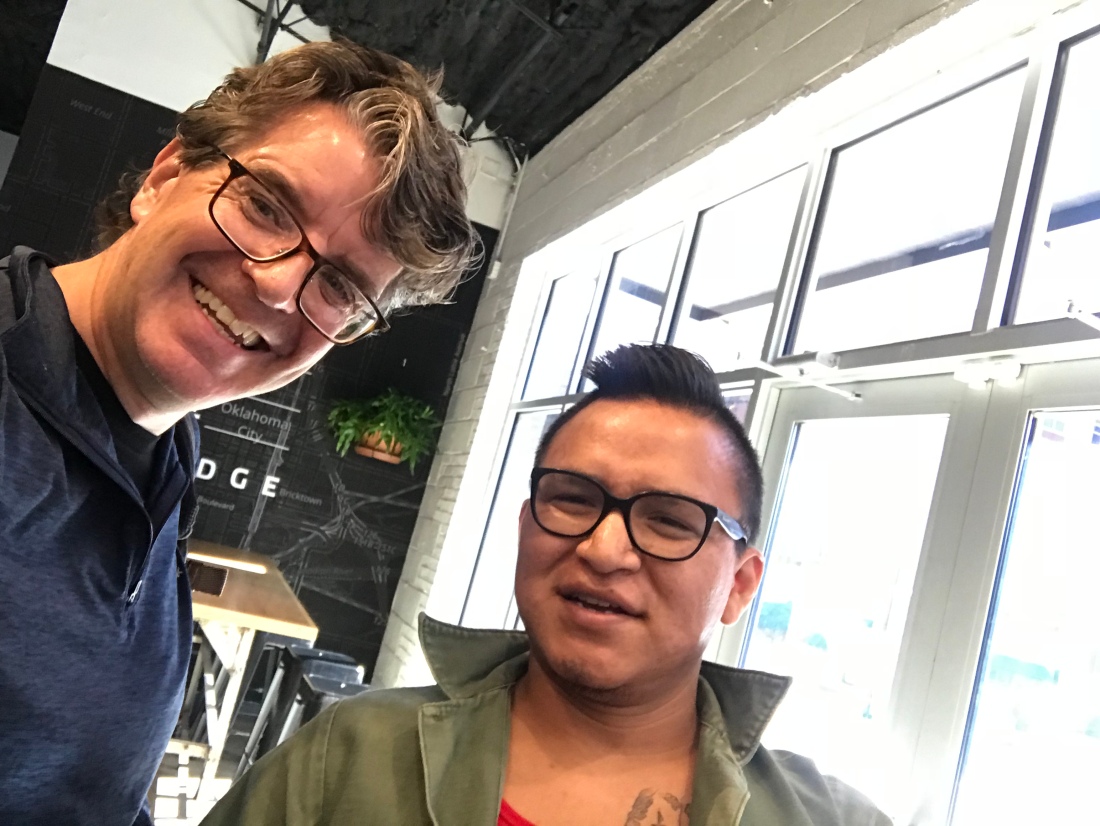 Joel Tunney, a young Navajo regular
from Arizona, was struggling with an Alice Walker book he needs to finish for discussion before the weekend. He came to Oklahoma City for work and loves the place.
We got in to a broad conversation on reading and viewing. I have a 60 page rule, if a book is not grabbing me by then, I drop it. Joel’s number is 90. We agreed on In Bruges, Tombstone, Friday Night Lights (film, series and I read the book) – all great. He’s on the fence about  Westworld, I’m done. We also both agreed that the recent Wind River and Hell or High Water were excellent modern westerns. Joel needs to watch Game of Thrones and finish Deadwood.
The discussion turned to westerns and racial stereotypes in film. White man speak with forked tongue versus the brawling drunk Irish of John Ford movies (ok I’ll give you that one). 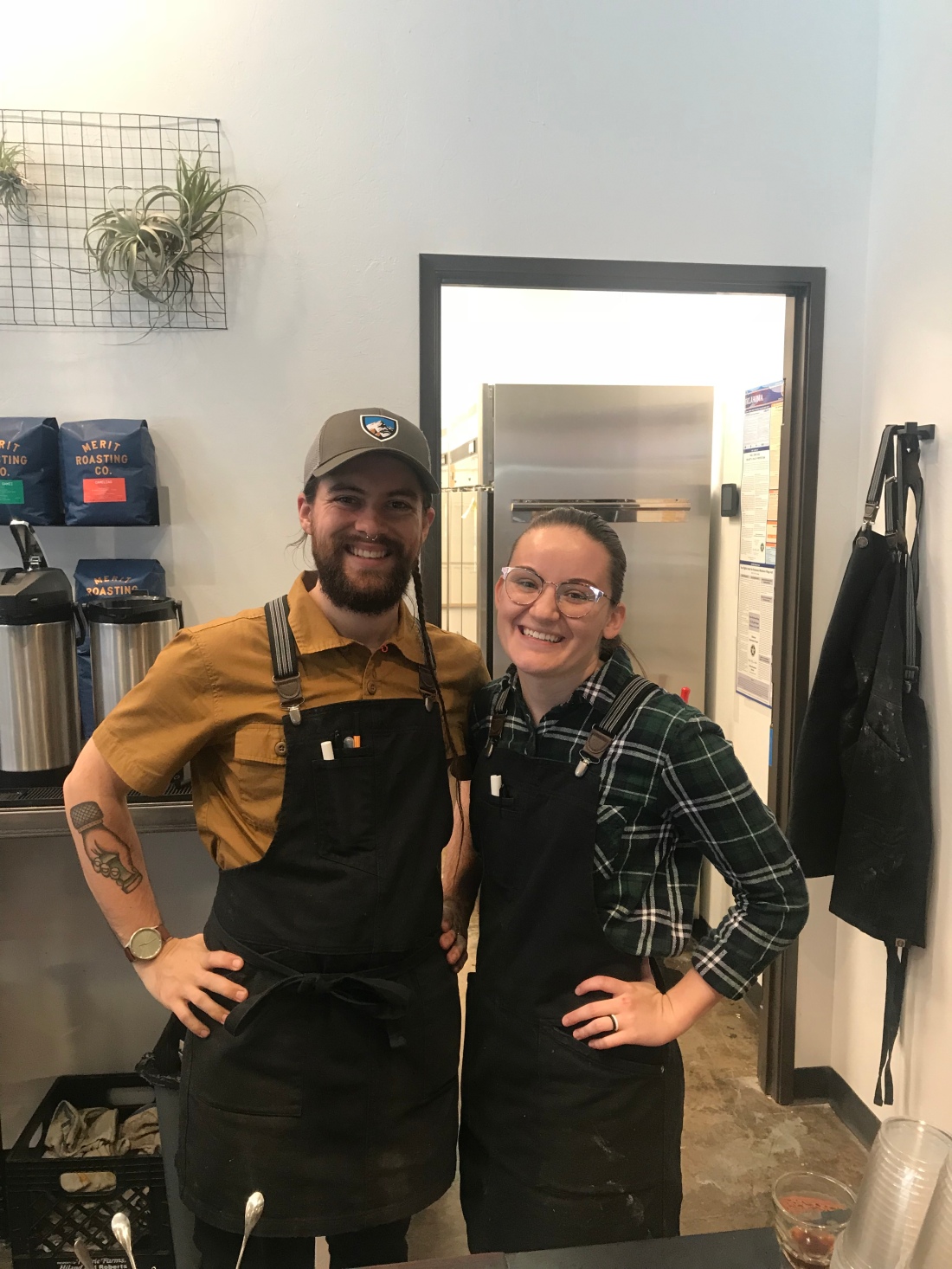 Alyssa and Kolton made the best cappuccinos and Avocado toast I’ve had on the road. I have a Dutch friend looks for Avacado toast where ever it’s available for lunch or breakfast. Now and again for me is enough.
Stitch are waiting on city approval  to get a grand big sign outside to front the store.
I had to leave , I only had an hour on the parking meter. Staff and customers alike all made me extremely welcome.
What’s the Mickey Mantle Connection in Oklahoma City? Street names and bars? 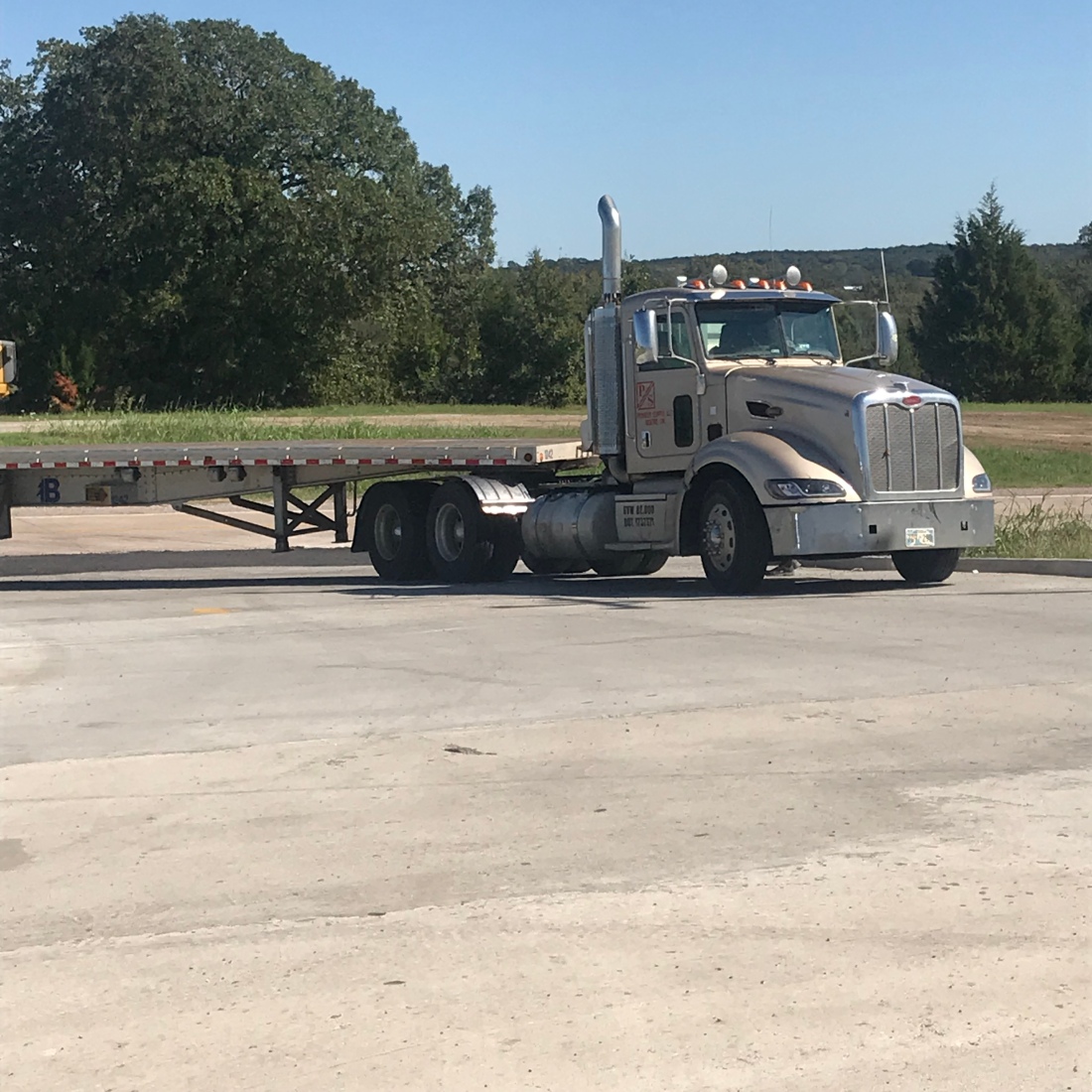 Some unfortunate trucker, in an 18 wheeler, ran out of gas, blocking the only way in and out of the gas station I had stopped at. He barracaded  everyone from getting out in anything bigger than a Mini Cooper. I had just filled up. The driver had to carry multiple containers of fuel , a few hundred yards, to fill her up enough to get the truck restarted.
As I sat there for half an hour, watching this slow  project in action , watching the other parked  customers waiting patiently,  I asked myself, have I become more tolerant being removed from NYC these weeks, surrounded by all this hospitality and niceness?
The answer was a resounding NO! The Dipstick should have gotten diesel. He has two things to do, fill her up and drive her. I soooooo wanted to lay on the horn but the very large bearded truck driver could have easily knocked the snot out of me. 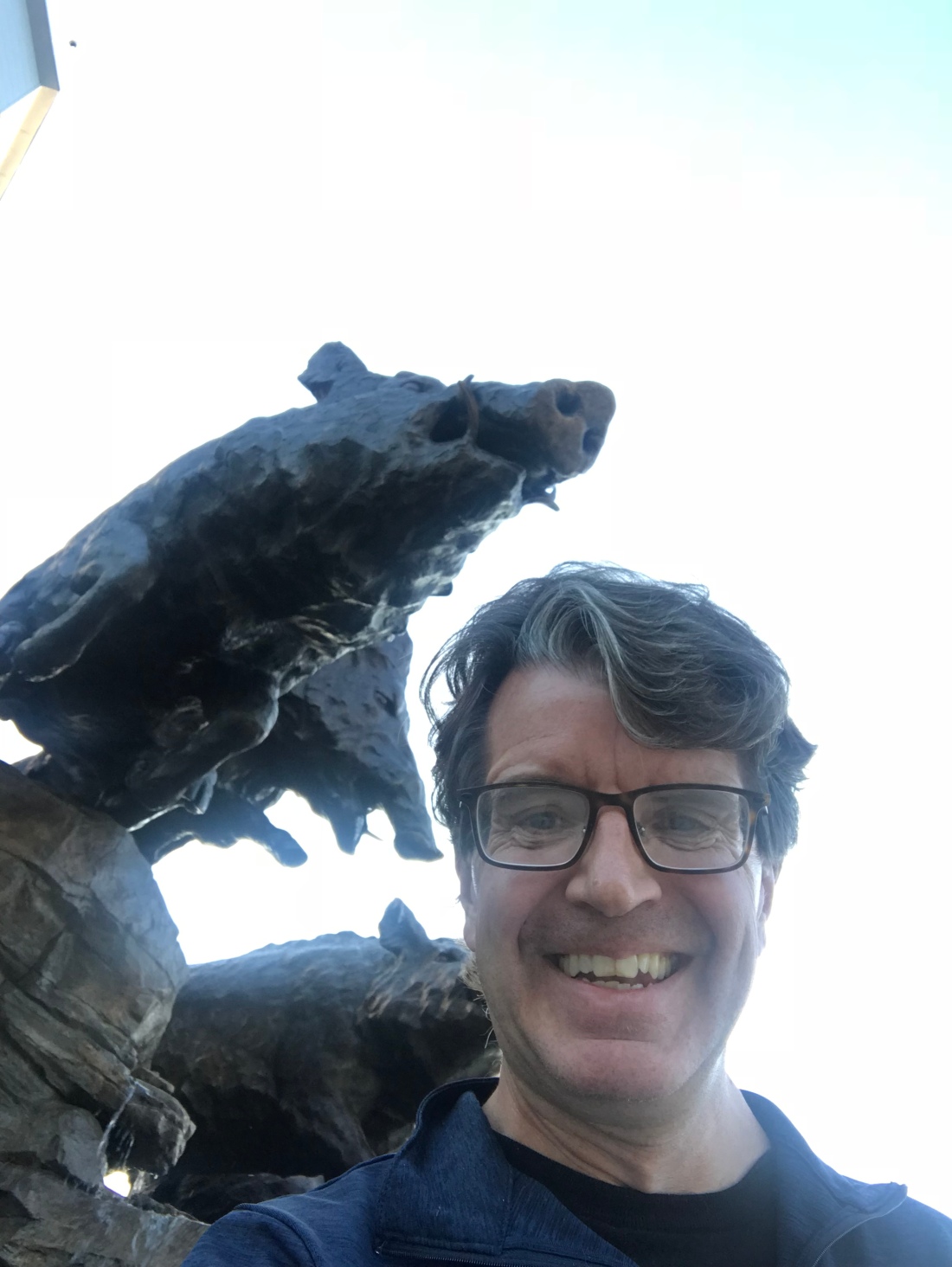 210 miles from Oklahoma City to Fayetteville, Arkansas, with marginally interesting roadside views. I passed through parts of the Ozark, it looks very bushy. Booked into a Staybridge Suites again, right by the University of Arkansas . 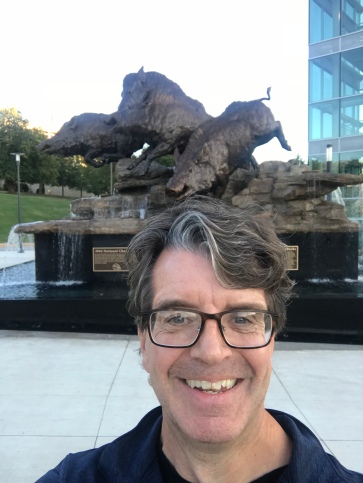 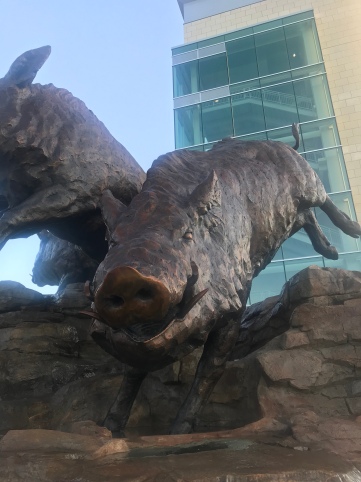 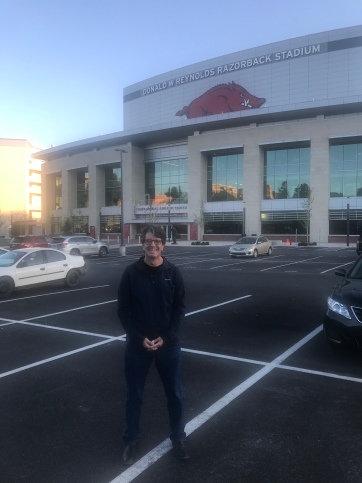 I stopped to see sparkly new looking Razorback stadium, as I got close to the hotel. Frank, a faculty member took my photo and gave me some dinner recommendations and places to see in town. The campus and facilities look pristine . Frank also pointed me down to the hog fountain , it’s a powerful looking piece.
Hit the hotel gym  as it was mostly an arse numbing day again, showered then headed to Hugo’s on recommendation. It’s a basement level, checkered tablecloth joint , the best known restaurant in Fayetteville , as I understand. Opened in 1977; they never change decor out of a superstition that they’ll mess with their success if they do. 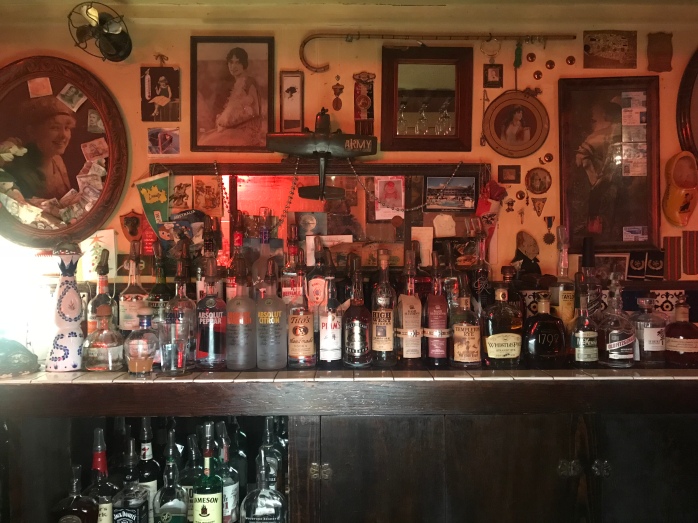 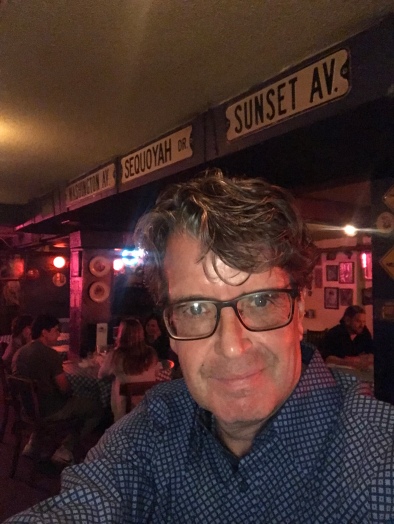 After a delicious bacon, Swiss burger I took a wander around town and landed on Dickinson, the main party drag. It’s got two or three dozen bars and a Bourbon Street buzz (ish). There was a moderate amount of people out at 10:30, mostly students obviously. There was a well stationed food truck section on a lane between the bars, smart locationing – everything from tacos to pie. 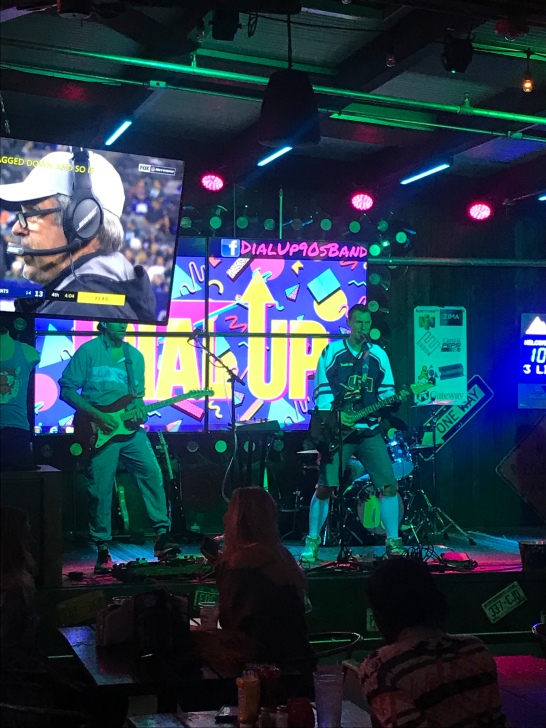 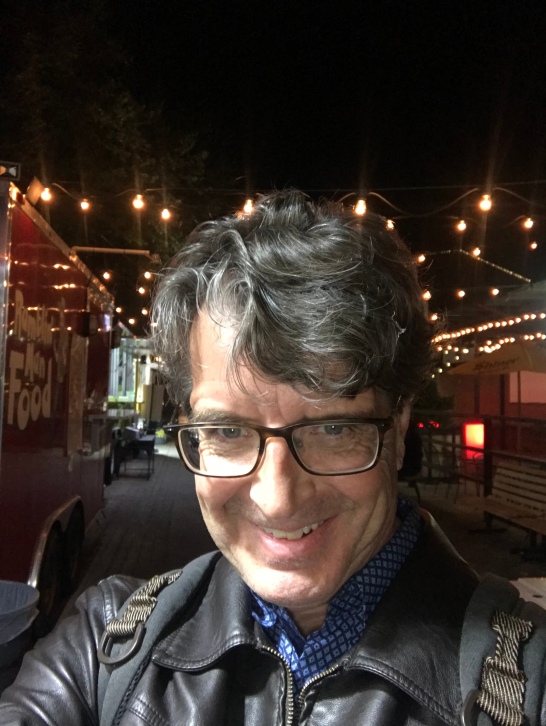 Stopped in at JJs, a buffalo wing and pitcher establishment with live music. Tonight they had Dial Up, a 90s cover band, blaring Jump Around up to 11 , as I got in. Franco the bar tender was wearing a Depeche Mode , Black Celebration, tee so we bonded and I got my OJs free.
On leaving JJs, I popped into Willy D’s, a few doors down, where they had two guys on duelling pianos. Too many Willy’s, I left. 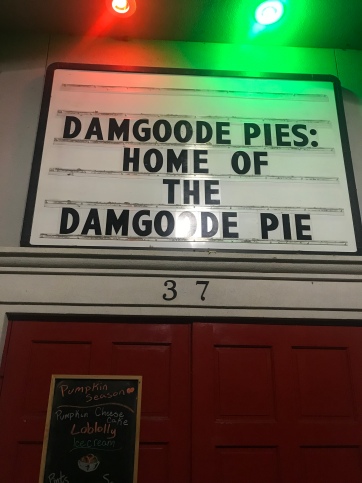 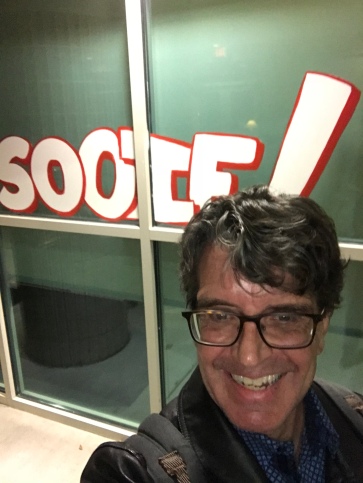 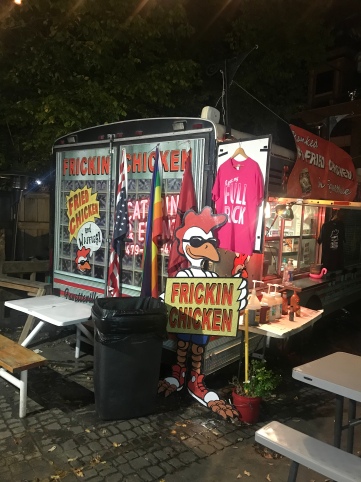 Another first, a drive up liquor window on Dickson .
And then I stopped in at Puritan, a coffee and beer spot. Needless to say , I was the only one drinking coffee at 11pm. 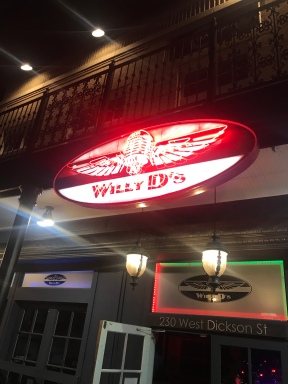 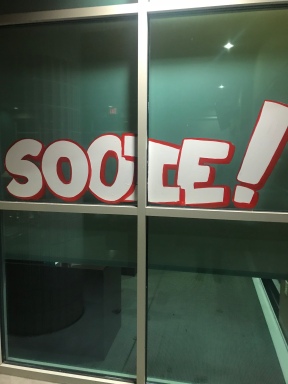 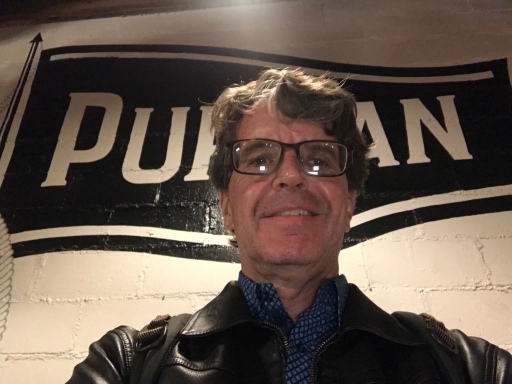 Fayetteville has a lively partying Main Street. I will come back for brekkie and take a daylight gander at the town.
Hotel: A freebie – another 10 Hotels.com booking
Dinner: $10
Gas: $53 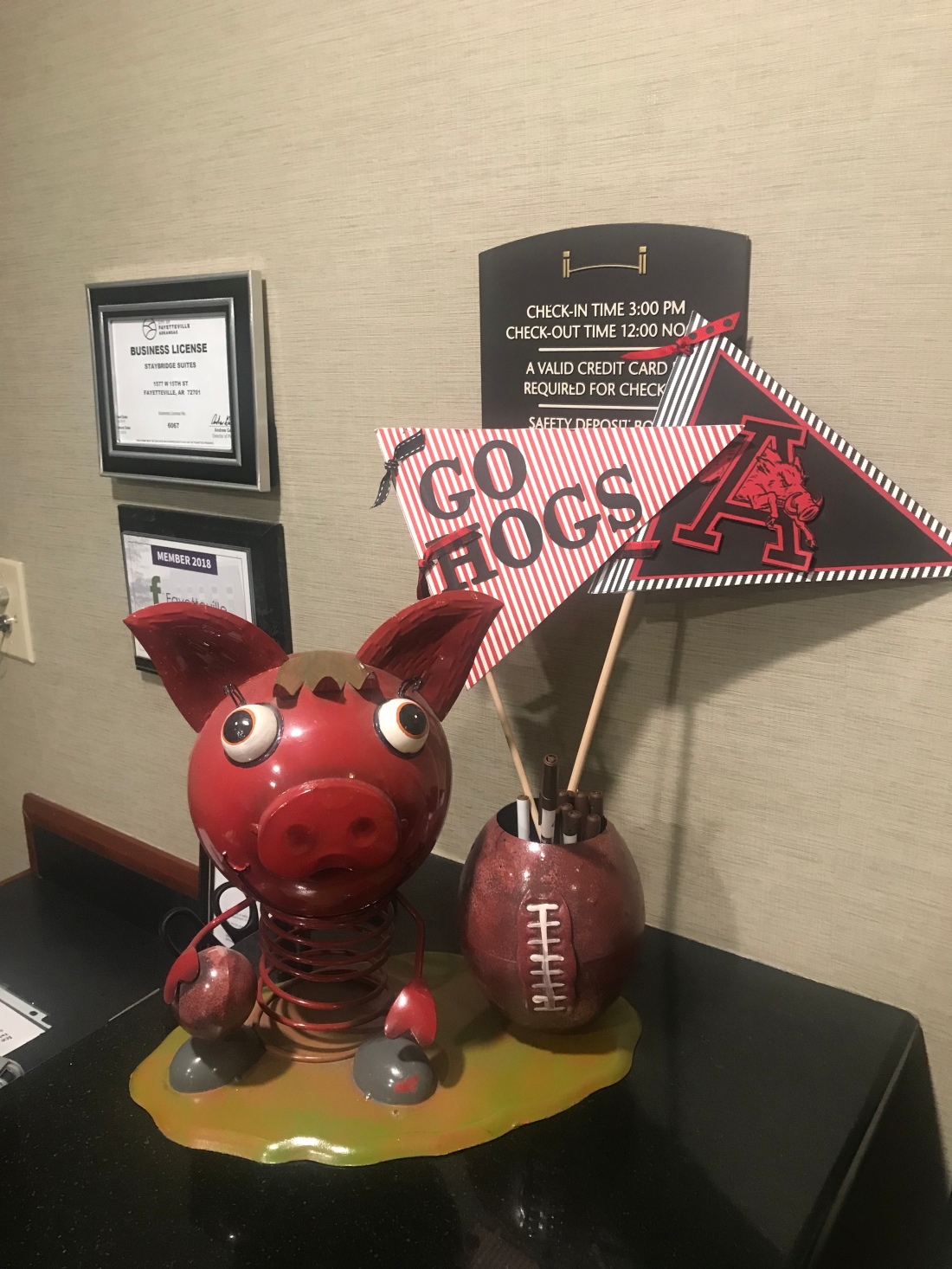