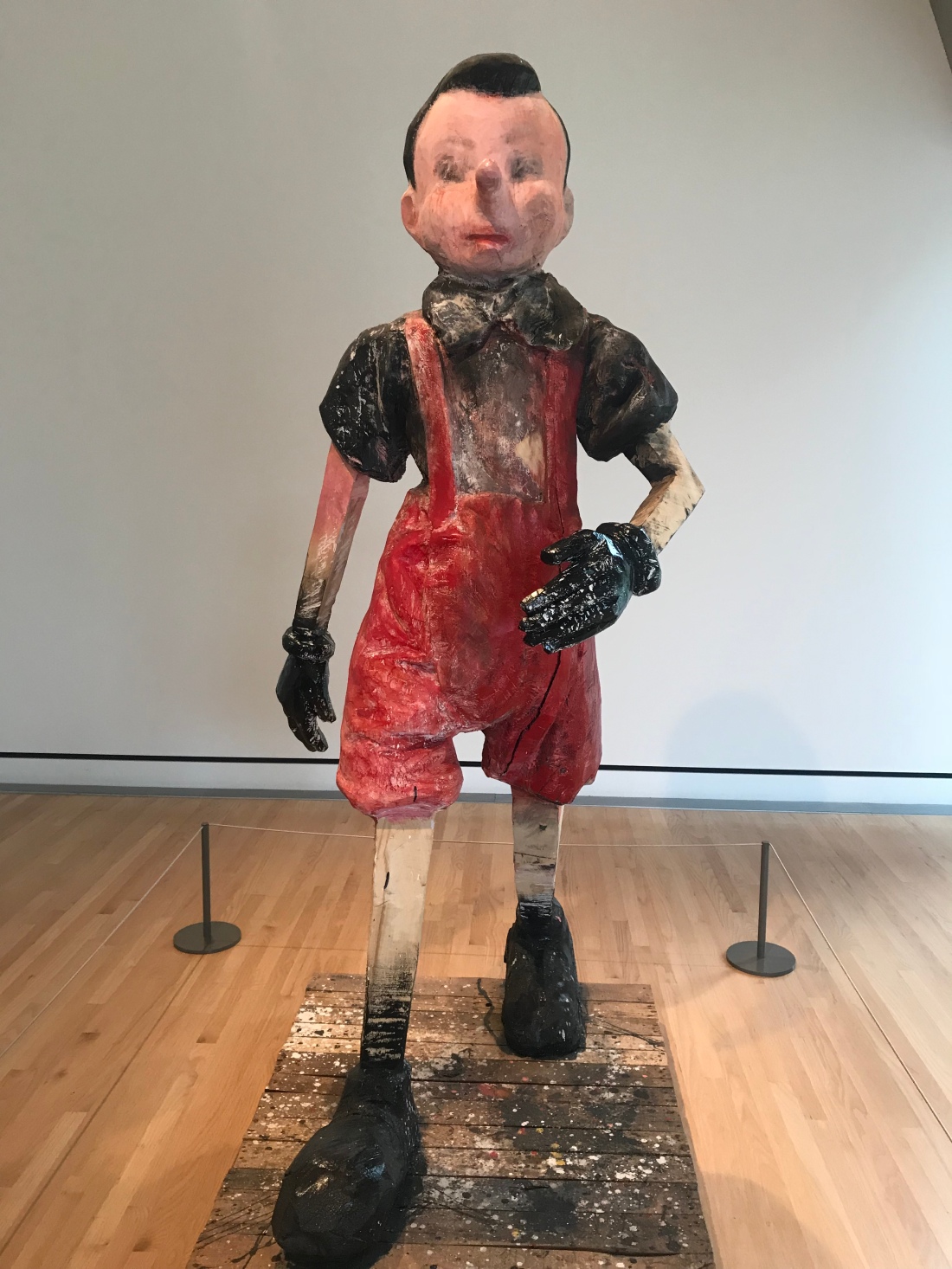 I got my answer.
Mikey Mantle was born in Oklahoma, lived there in his youth before he went on to his illustrious basketball career in the NFL.
I went to the Farmers Table for breakfast, put my name on the list, but didn’t feel like waiting half an hour and left. Friday morning and packed. 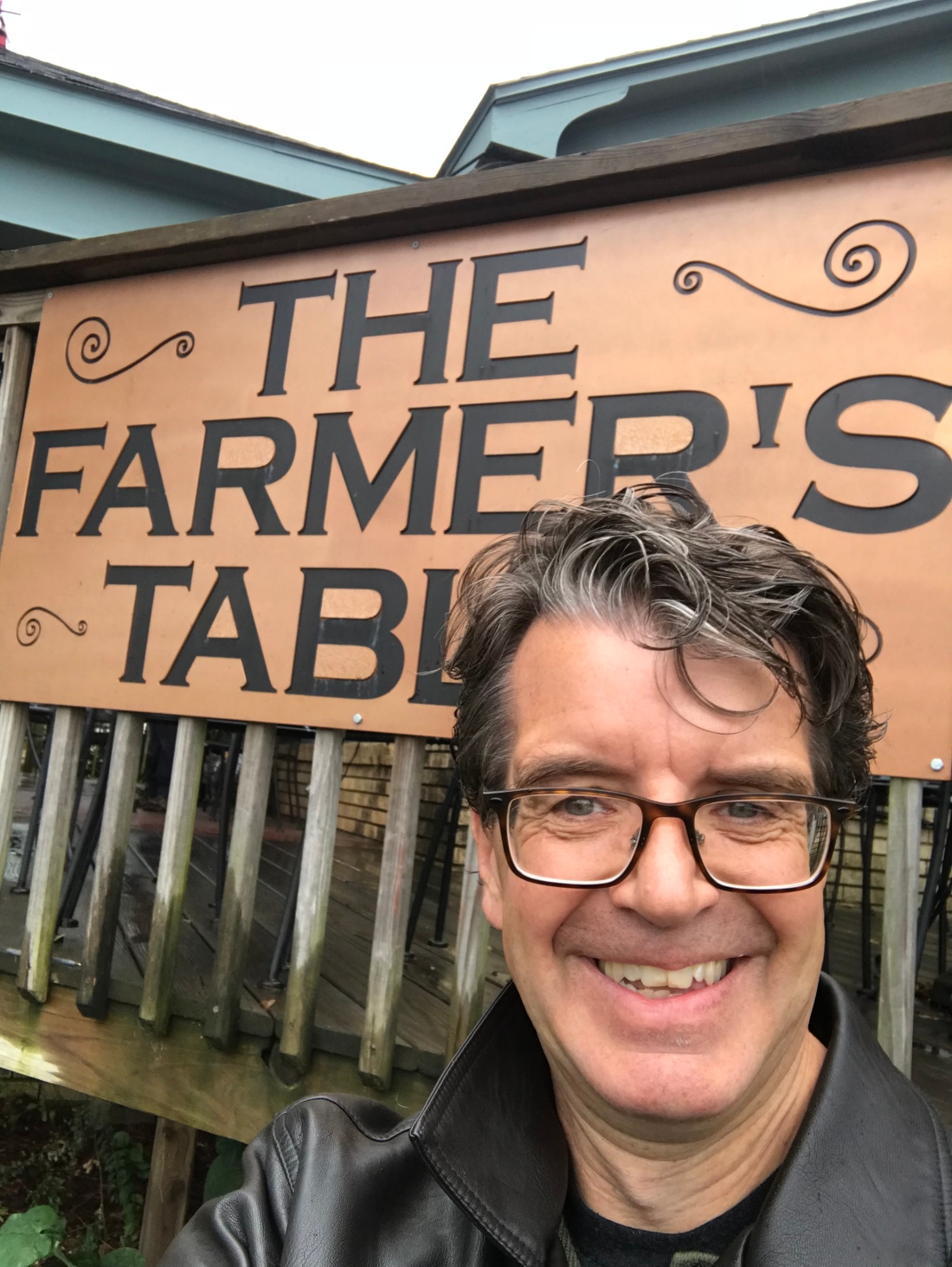 So I continued on to The Bread Basket in town, a highly rated breakfast and lunch spot . The ivy covered facade was very appealing. Bacon egg and cheese on a house bread and good cappuccino, before you ask. 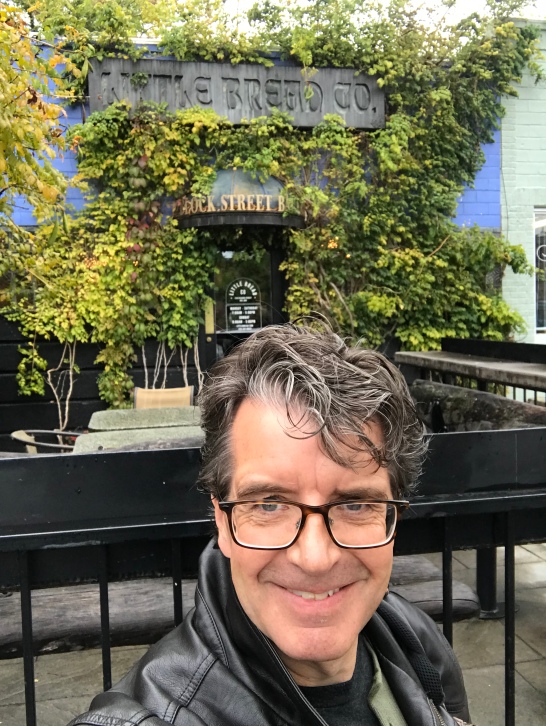 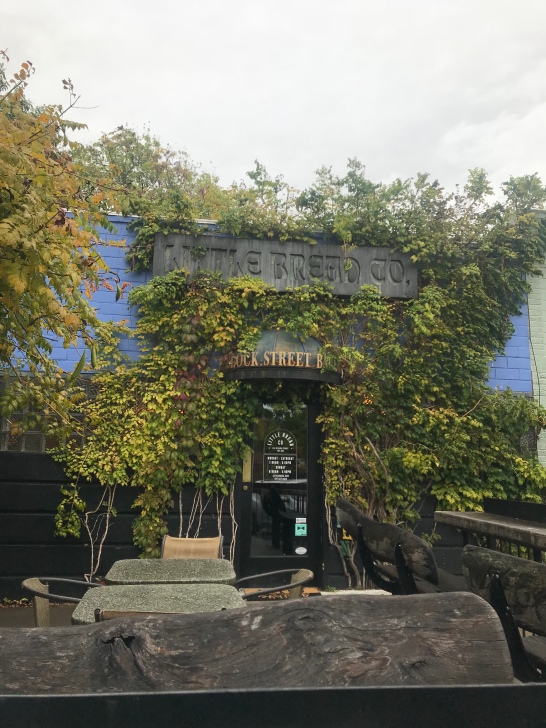 I had one of the most enjoyable mornings of my trip hanging our with my new friend , Kayelyn Johnston, in Fayetteville. We shared a table in the coffee house and got to talking.
Kayelyn  is from nearby Eureka Springs. We sat chatting in the coffee shop for over an hour then Kayelyn gave me a mini tour of town and walked me to the massive used book store, on Dickinson. I bought an Elmore Leonard I didn’t have (Cat Chaser my favorite of his, and there is a hard to find film adaptation with Peter Weller & Kelly McGillis at her peak I recommend). 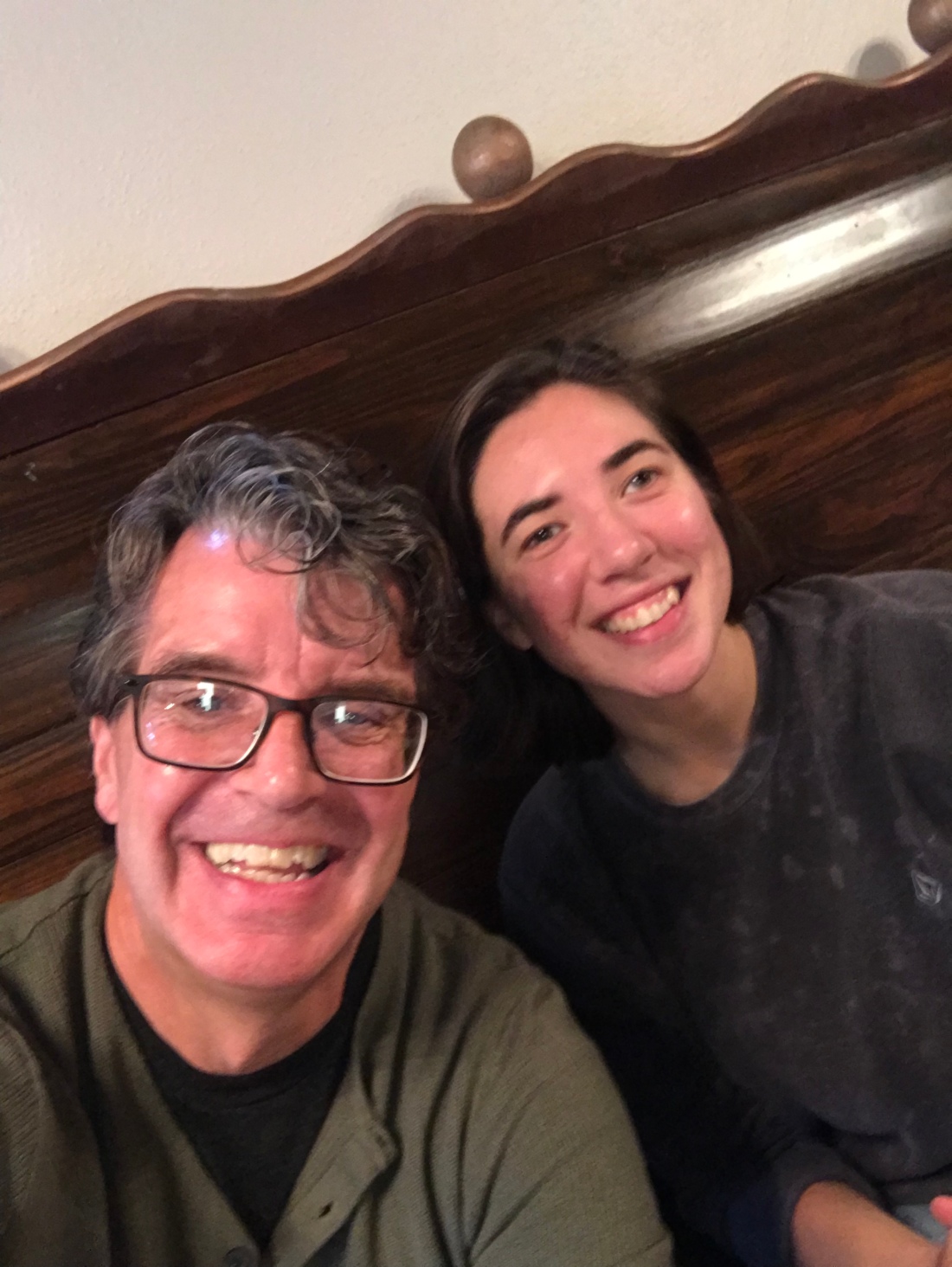 We bonded over  Black Mirror, The Matrix, John Wick, anything Keanu , John Malkovich, Don Delillo books, Queen and the upcoming Bohemian Rhapsody bio. I recommended Under the Skin, book and film.
Kayelyn had worked managing  inventory for a group of 9 bicycle stores for the  past 4 years. One of her recent tasks involved organizing period bicycles for the latest True Detective series , just filmed around Fayatteville . We agreed season one was a masterpiece. I liked two. She moved jobs recently but is still an avid cyclist. 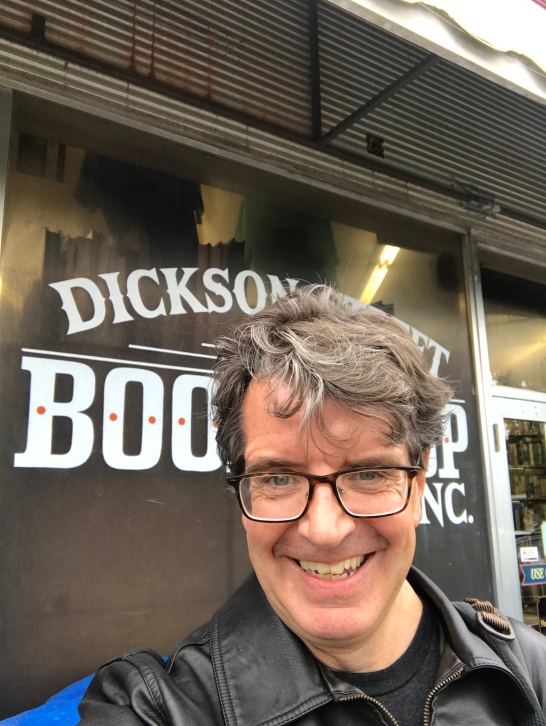 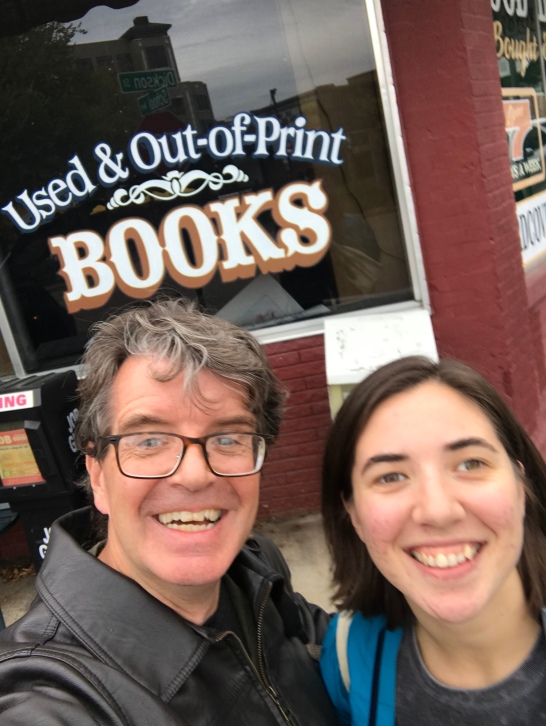 Kayelyn has a very broad movie and series viewing knowledge base for a 25 year old. My kind of conversation. I really hope I can return the hospitality in New York if she gets East.
Definitely one of the more fun mornings of my trip. Another town I’d come back to.

On recommendation from Kayelyn and a blog friend I drove the 30 minutes to the  Crystal Bridges museum in Bentonville. The galleries are free to the public and they have a large, elaborate collection, The building is a maze like, multi level structure , primarily glass , surrounding a man made Lake and sculpture gardens.
It’s a mix of modern pieces and american masters, including extensive galleries  of frontier paintings. 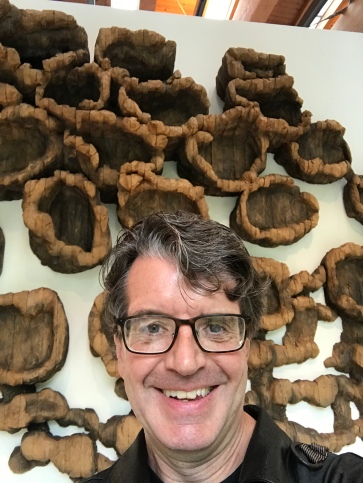 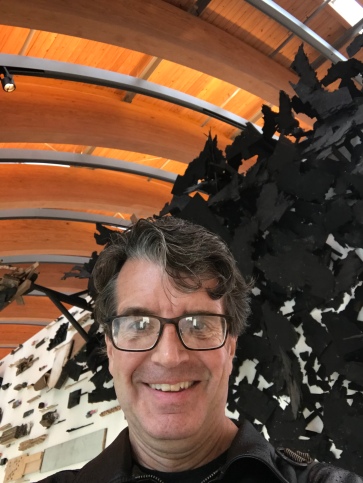 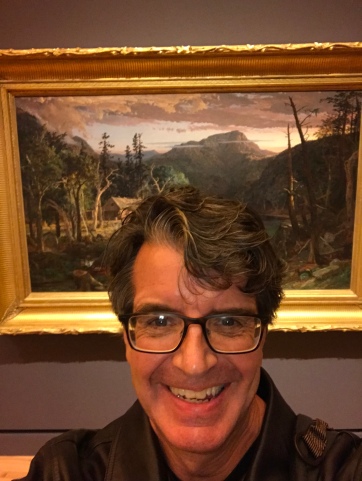 And a painting of the little dude from Bad Santa, strangely enough ( my second favorite Christmas movie after Die Hard). 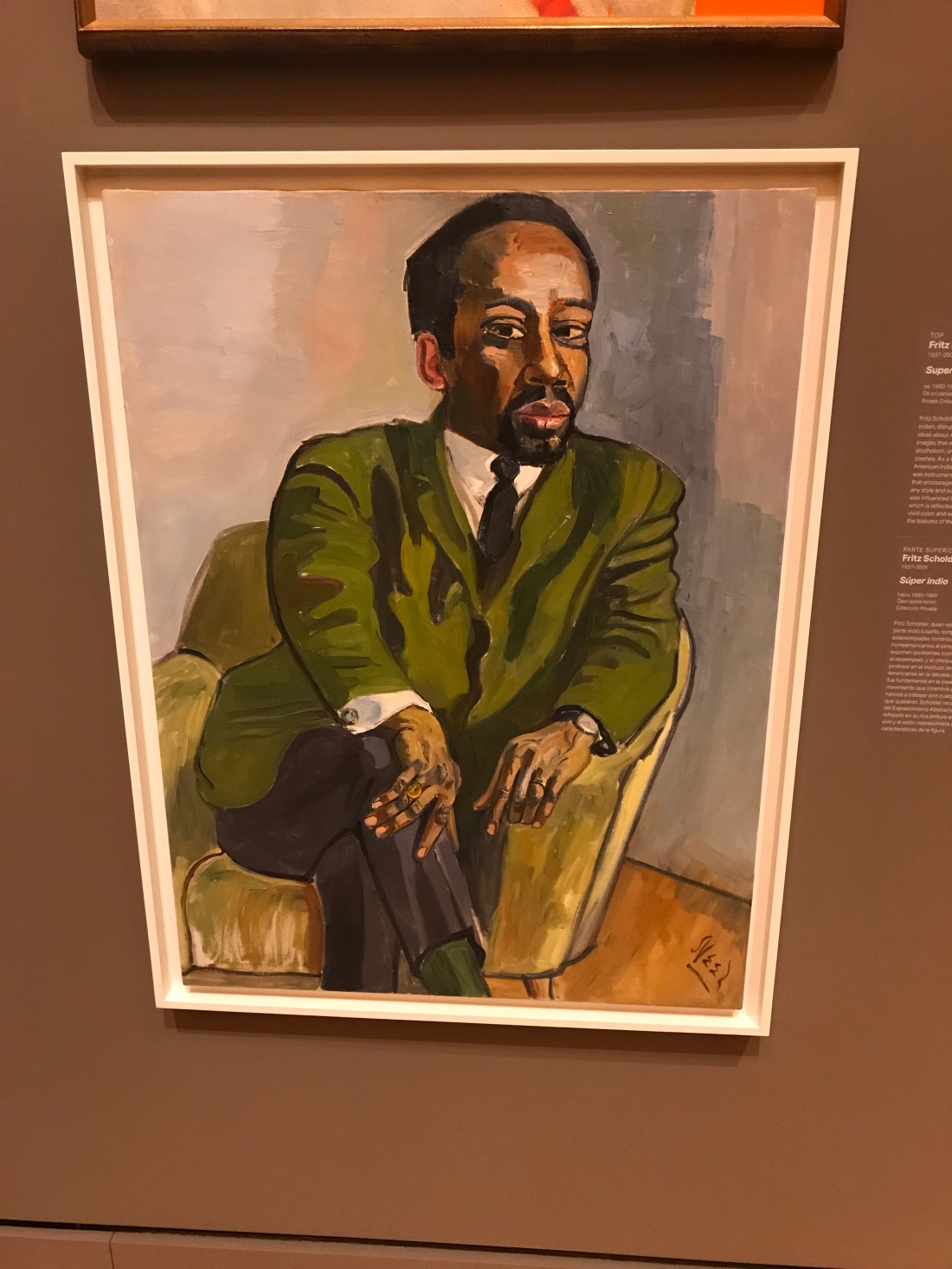 The garden exhibit has some gigantic pieces, but it was pissing out of the heavens so I couldn’t take it all in. 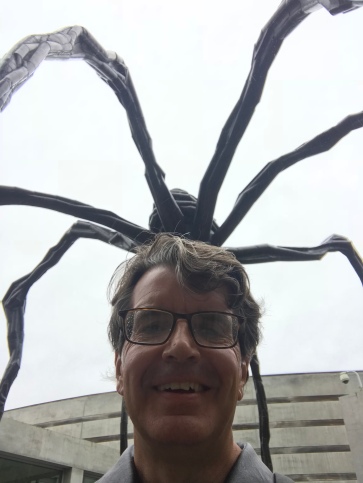 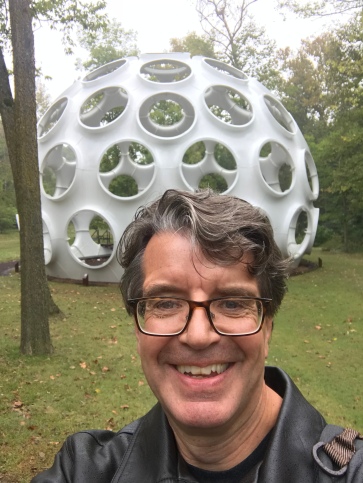 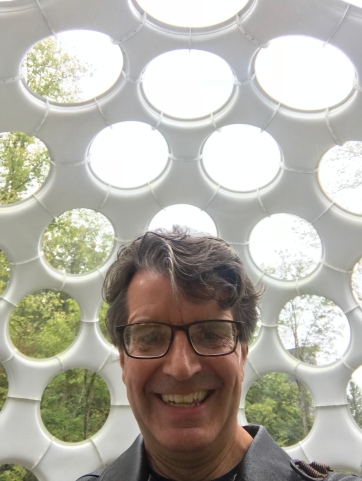 It’s the most beautiful gallery I’ve been in. The modern collection included a Rothko, my favorite.
Gifted by an organ donor? 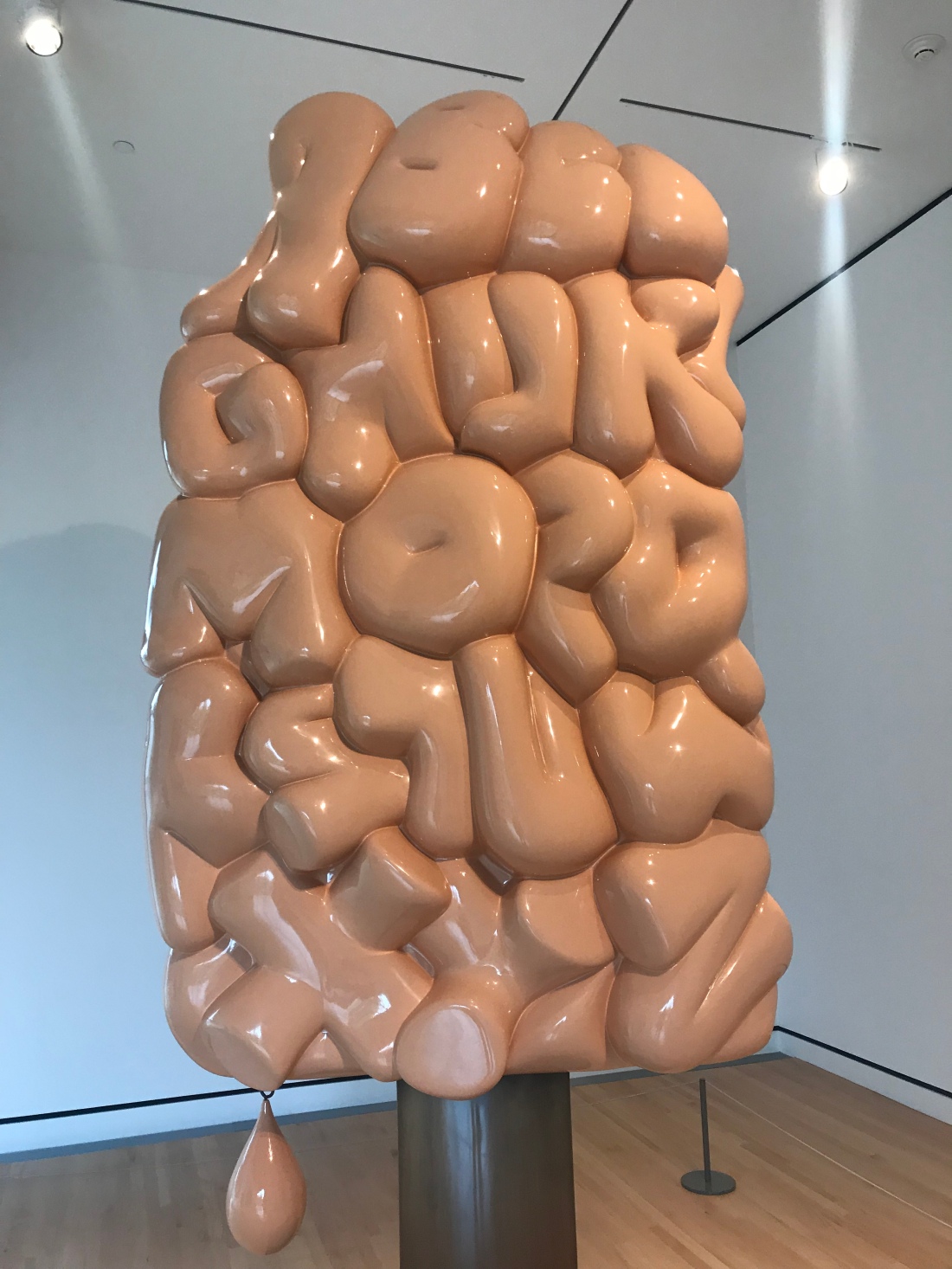 Keeping with the High Art theme, I drove into Bentonville to see the original Five & Dime, Walton’s , the birthplace of Walmart and The Walmart Museum. 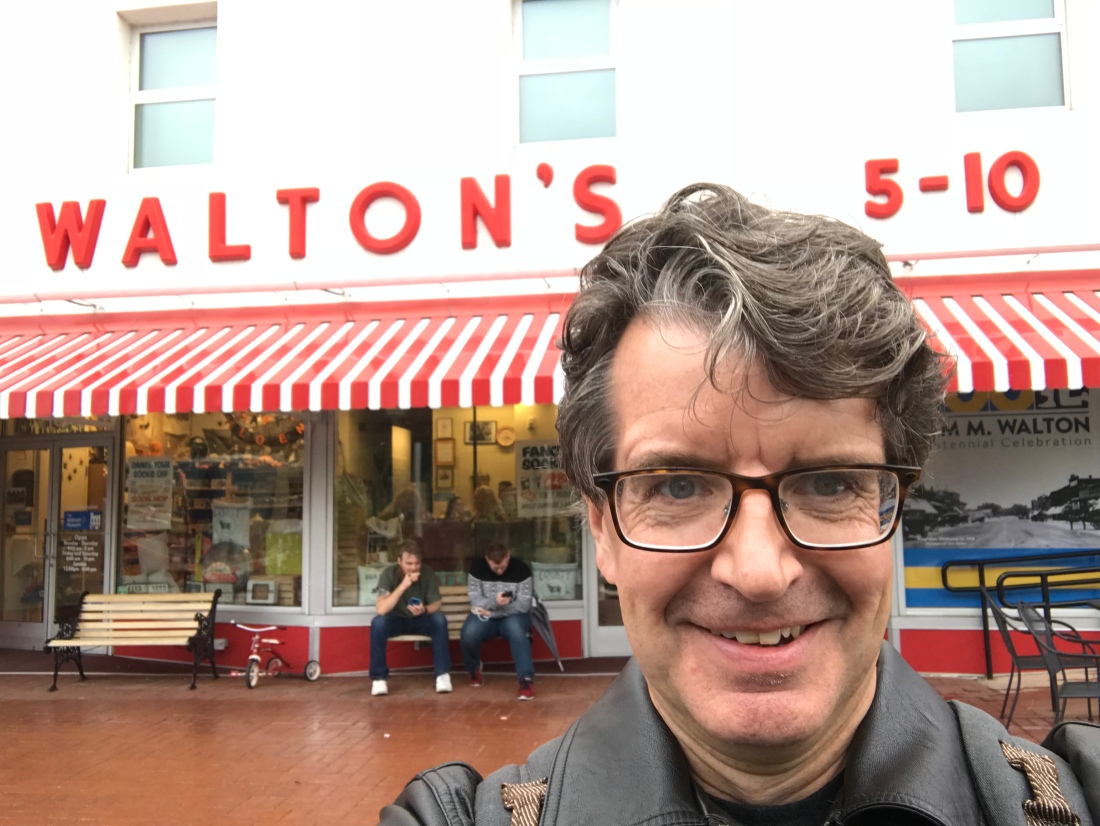 The museum display, I could care less about, lots of black and white stills and talking heads. But the store and ice cream store/soda fountain were worth seeing, centered in the ultimate little All American town. 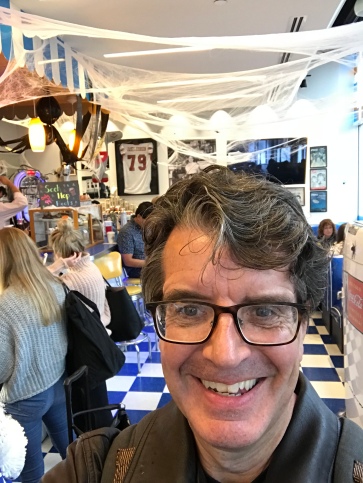 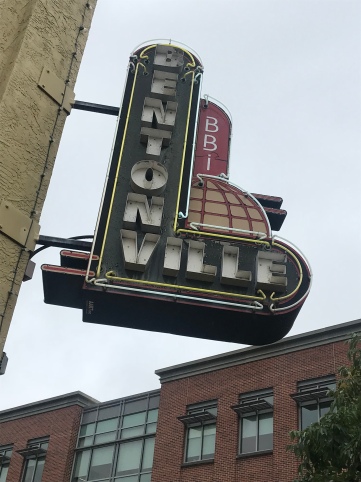 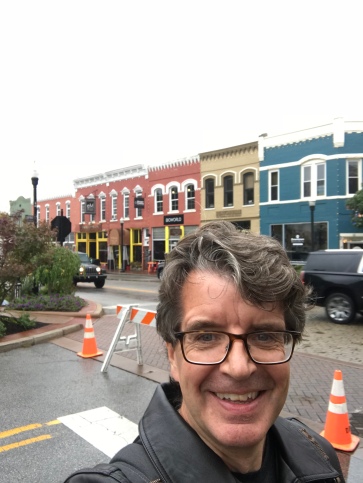 Google maps took me through the back roads to Missouri, to avoid Friday traffic. It all looks a lot like upstate, in my Ancramdale area.
278 miles and five and a half hours later, I’m in Missouri. To quote Judy Garland, wifey/researcher is coming to “meet me in St. Louis Louis” on her way back from a trip to Houston. 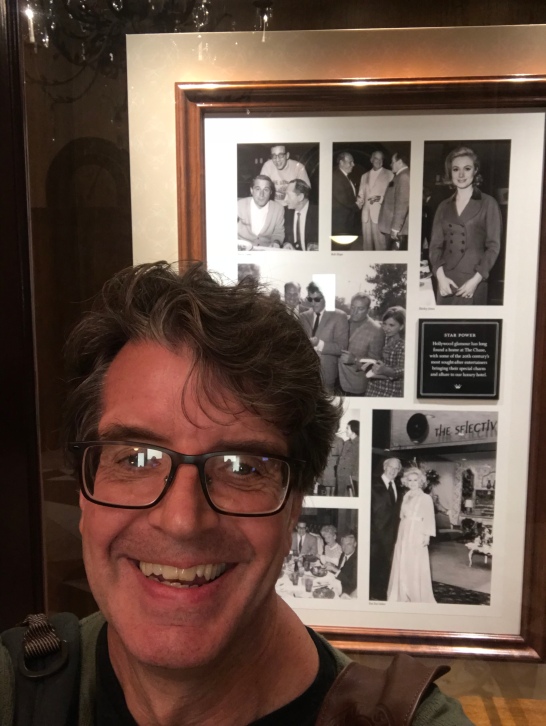 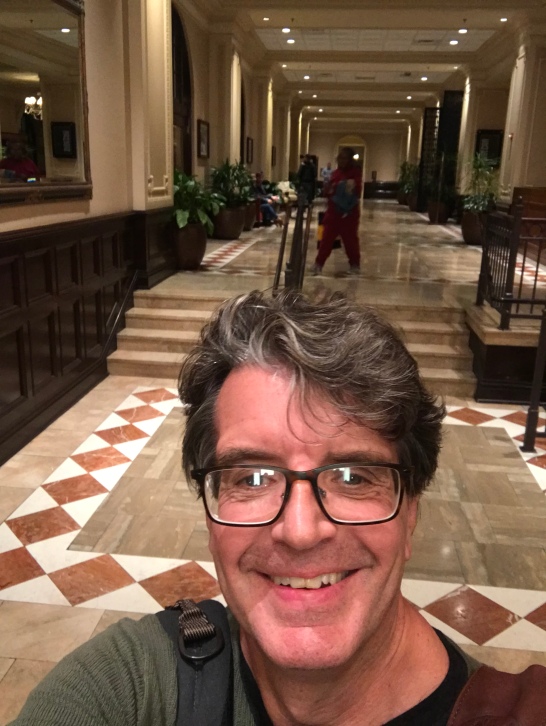 Checked in to a classier Hotel the next couple of nights, since I’m not solo . Booked The Chase Park Plaza Royal Sonesta St. Louis. Dean Martin and Reagan stayed here, to name a couple , atleast based on the wall photos.
I had ordered room service for dinner but it hadn’t turned up after an hour and I had to leave for the airport. 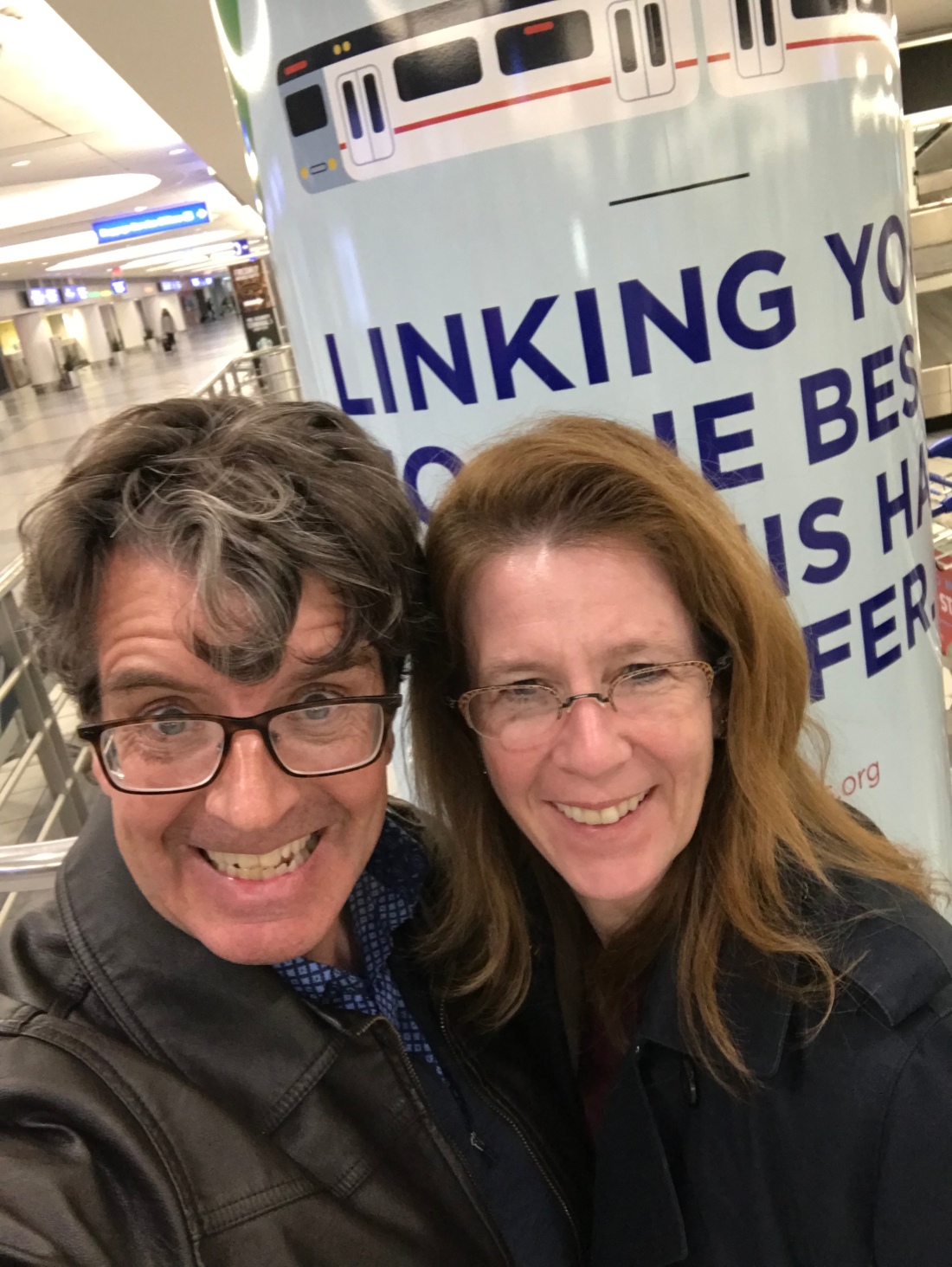 Drove to the St. Louis airport and picked Stacey up at midnight.  Then drove around looking for food. I’m still holding off on fast food so I got some deviled eggs at a Supermarket . God help me.
The Tab:
Hotel: $270
Gas: $53
Dinner: $6 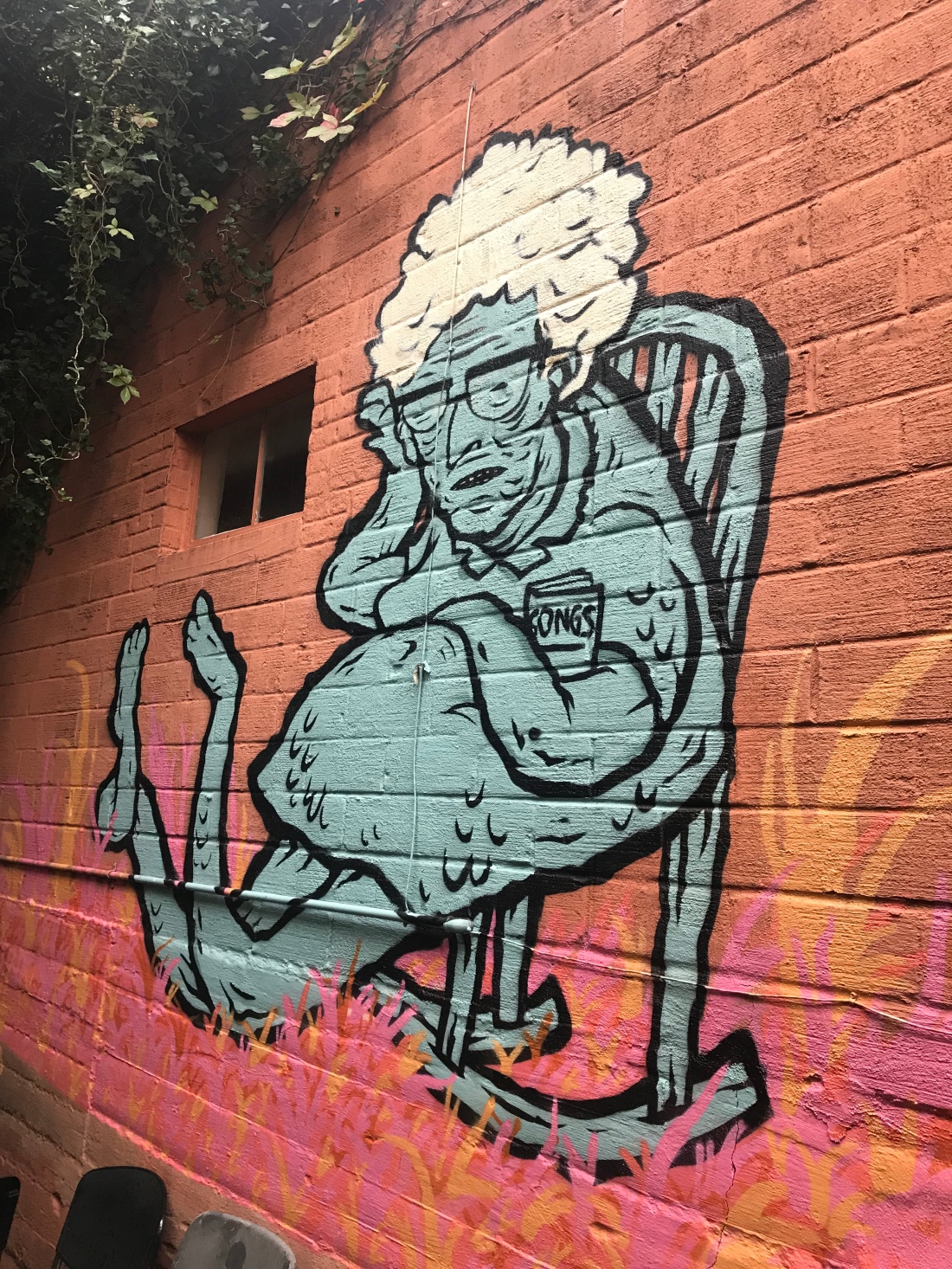